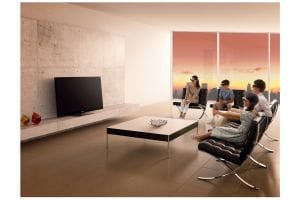 Sony kicked off its 2011 CES with an aggressive and glitzy 3D pitch, and impressive expansion of 3D technology across its product ranges, including camcorders, cameras, laptops and, of course, TVs.

Remarkably, 3D images can be seen via its 3.5-inch LCD display without the need for glasses (though you need glasses to watch footage played back on a 3D display). It should be available in the spring and cost around the £1,000 mark.

Sony’s Cybershot digital camera range also gets the 3D treatment for 2011. Its new Cybershot range can shoot full HD video and take 3D photos – even allowing photos to be taken during video capture. Sony promised a low price for the 16.2Mp WX9 model – just $220 in the US – potentially as little as £150 in the UK.

See the Sony Cybershot WX9 in action at CES 2011 in the first look video below:

Also on show were 27 new Bravia TVs, with the flagship HX929 at the fore. It’s an edge backlit LED 3D web-enabled TV, featuring a host of new Sony technology, including its latest ‘X-reality Pro’ picture processing engine and the latest version of Sony’s Motion Flow software.

According to Sony, its new X-reality software is designed to not only enhance broadcast image quality but pictures streamed via the TV’s internet connection. Like 3D, Sony has put internet content at the heart of many of its ranges for 2011.

The HX929 is due to launch in the spring and will be available in 46-inch and 55inch screen sizes.