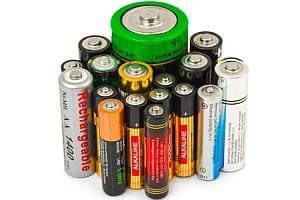 Half the population have never recycled a household battery, with many saying they just don’t know where to take them, according to the European Recycling Platfrom (ERP).

Around 40% of batteries are sold at Christmas – that’s about 10 per person. It’s not surprising then that the beginning of a new year is when hundreds of tonnes of used batteries could be making their way to landfill.

Which? batteries expert Hazel Cottrell says: ‘When batteries end up in landfill they leak dangerous chemicals. ERP says that in 2009 only 2% of batteries were recycled, so it’s really important we all recycle more of them.’

If you’re struggling to know how or where to recycle batteries, check out our essential recycling guide for tips on how to recycle more and better. We’ve also reviewed rechargeable batteries and single-use batteries, and recommend Best Buy batteries based on our thorough test results.

All shops selling more than 32kg of batteries each year must offer recycling facilities to help reduce the number of batteries that end up in landfill.

Poundland was ‘deeply concerned’ to hear our findings, which it could not explain and promised to investigate fully. Lidl said boxes had been stolen from two stores and the box in the third must have been being emptied. You can read the full results in our news story about battery collection.

Just 2% said the main reason why they had never recycled a battery was that they don’t have time and only 8% said that they can’t be bothered.