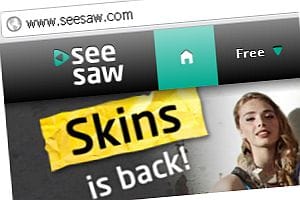 SeeSaw, the online TV streaming service which includes BBC, Channel 4 and Five programmes, has launched on the Boxee platform in the UK.

SeeSaw, run by broadcast company Arqiva, offers similar functionality to the BBC iPlayer, but also includes free, albeit ad-funded, catch-up TV across BBC channels, Channel 4 and Five. SeeSaw also offers a ‘NonStop’ service for £2.99 per month, which removes the ads, plus a rental service for either individual episodes or a whole series of programmes.

Boxee is a platform to deliver on-demand TV, film, web app and media content, either via Boxee software installed on a PC or Mac, or via the dedicated Boxee Box, which connects to an HD TV. SeeSaw’s arrangement with Boxee is the first time that SeeSaw content has been available directly on a TV-connected set-top box rather than through a computer’s web browser.

According to SeeSaw, its test service will not initially be available through an app on the Boxee platform, but simply through its search function. Searching for a programme which is available on SeeSaw will take users to the SeeSaw player. At launch, only free ad-supported SeeSaw content will be available.

Which? has taken a first look at the D-Link Boxee Box, to review its features and performance. Read the review to find out our first impressions of its media streaming abilities.

We’ve also got a video review of the Apple TV, which launched in late 2010, although it doesn’t yet offer access to streamed UK TV programmes. Other web TV alternatives include the much anticipated Google TV, which is set to launch in the UK later in 2011.