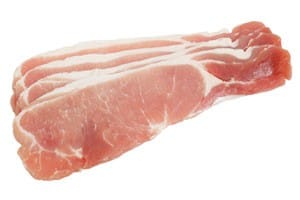 A Which? investigation reveals huge variations in the amount of water added to supermarket bacon, with four out of 15 packs of rashers we tested falling foul of regulations.

If added water in bacon exceeds more than 10%, under the Meat Products Regulations it must be indicated in the product’s name – saying ‘bacon with added water’, for instance. However, none that exceeded 10% did, including Essential Waitrose unsmoked British back bacon and Morrisons Sizzlers rindless unsmoked back bacon.

If you love bacon, take a look at our review of the Tefal Toast n Bacon, a toaster with a built-in grill for making bacon sandwiches. For tips on kitchen appliances and food preparation, see our kitchen reviews area.

Bacon contains water naturally and adding more isn’t illegal, but across all brands the amount of added water varied widely – from 3% to 13%. Identical packs also varied significantly. For example, two packs of the same Marks and Spencer bacon differed by 9%. Morrisons Value rindless back bacon had the lowest added water on average, at 3%, but Morrisons also had the highest added-water content with 13% – ironically on its pricier standard range.

We also found the country of origin was not marked on some Aldi and Lidl packs of bacon. Aldi’s British-sounding ‘Ashfield Farm’ bacon, for instance, actually comes from EU imported pork.

We will be taking the results of our findings to the relevant Trading Standards officers who are responsible for enforcing added-water regulations.

The research was conducted by public analysts at a Official Food Control Laboratory, who tested two samples of each product for added water, fat, moisture, ash, protein and meat content.