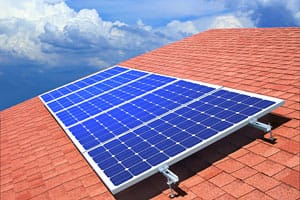 Solar power is a good eco-friendly option, but it’s expensive to install

British Gas has launched its new ‘rent-a-roof’ solar panel deal, that will give more people access to free solar panels.

British Gas will rent roofs of housing association properties, install solar panels and maintain them for 25 years. The energy company pays landlords £30 a year to rent the roof, and the tenant’s electricity bills should reduce by £100 a year or more as the property benefits from energy generated through the solar panels.

British Gas makes money from the scheme by collecting money paid through the Feed-in tariff – a government scheme that enables people with certain microgeneration technologies installed (such as solar panels) to sell any unused or excess electricity produced by their system back to the national grid.

Which? energy expert Sylvia Baron says: ‘If you’re renting and your landlord takes part in this scheme, this could be really good news for you as you will save money on your electricity bill. However, if you own your property and want to have solar panels, you should consider buying them yourself.’

In the long run you could be better off paying to install your own solar panel system and keeping the lucrative Feed-in-tariff income. Even though the initial cost of installing panels is off-putting, you could save thousands in the long run.

When Which? looked at the savings involved in rent-a-roof schemes, we found that even if you were living in the UK’s sunniest region, the maximum you’d save is £412 a year off your electricity bill, compared with the £1,313 that free solar panel companies such as British Gas will collect from the feed-in-tariff.