This new DSLR is an update to the hugely popular Canon EOS 1000D, which has been Canon’s flagship entry-level DSLR for two years now and in need of an update.

Crucially, the older EOS 1000D was looking a little long in the tooth as it offered no video recording. Canon has remedied this shortcoming by adding 720p HD video to the newer EOS 1100D.

Upon first inspection, there’s nothing revolutionary with these updates. The lack of video mode was something that urgently needed addressing if Canon was going to maintain a foothold in the entry-level DSLR market, but the other features represent only a modest series of updates to the admittedly successful design of the EOS 1000D.

Of course, picture quality isn’t a matter of megapixels alone, and there’s no reason to doubt the 1100D’s likely picture credentials on the basis of its perfectly generous 12.2Mp resolution.

The older EOS 1000D model had a serious shortcoming in its lack of a video mode. At the time of its launch some two years back, this wasn’t such an issue, but since then video capture has become an expected feature in most DSLRs.

Canon has gone some way to redress this issue with the 1100D’s 720p HD video, but it’s interesting to see that Canon hasn’t gone all out and lavished Full HD 1080p recording on the 1100D.

While a Full HD-capable entry-level DSLR may have admittedly stepped on the toes of Canon’s higher-end models, this higher-res video would have given the 1100D more competitive specifications compared to its rival entry-level models, not least of which is the new Nikon D3100.

But by keeping the megapixel count lower and limiting the video quality to 720p rather than Full HD 1080p, Canon has deliberately set the EOS 1100D further back from its mid- and high-end DSLR options.

The earlier 1000D model was a huge success for Canon, delivering quality shots without breaking the bank, and the 1100D certainly has potential for similar success. However, the entry-level DSLR market has grown far more competitive in the last two years, and the 1100D will have some serious rivals to square off against.

Read our expert Which? review of the earlier Canon EOS 1000D model. 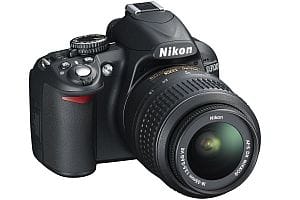 Not only do Nikon enjoy the benefit of a couple of months’ extra marketing advantage with the D3100, but the camera itself offers a selection of features which, on paper at least, seemingly outgun Canon’s offering.

For Full HD video on a Canon DSLR, you’ll now have to push further up the price spectrum.

Given that the gap between the release of the Canon 1000D and its successor was nearly two years, it could conceivably end up being a similar wait before we see Full HD being offered on the next entry-level Canon DSLR.

Higher resolution on the Nikon D3100

As ever, Which? will emphasise that picture quality is not determined by the number of megapixels your camera is wielding.

However, there’s no denying the marketability of a DSLR with a higher resolution, and to anyone walking into a shop and seeing the 14.2Mp Nikon D3100 next to the 12.2MP Canon EOS 1100D, the higher megapixel count on the former may look hold some appeal.

We’ll reserve judgment on the Canon EOS 1100D’s picture quality until we’ve had a chance to put it through our expert lab tests, and there’s no reason to doubt that it’s 12.2Mp sensor will be fit for task. After all, the 10Mp EOS 1000D was a seminal model in the relatively new entry-level DSLR market.

Guide Modes on both

Both the Canon EOS 1100D and the Nikon D3100 feature their own style of ‘Guide Mode’, which talk you through the camera’s various functions on-screen.

As these cameras are aimed at first-time DSLR owners who may be getting to grips with the more complicated features, these Guide Modes can be a useful helping hand.

We found the Guide Mode on the D3100 to be approachable and useful, and hopefully Canon will have made the 1100D’s similarly helpful.

Read our full Which? review of the Nikon D3100.

The Canon EOS 1100D will be available in April 2011, with a launch price of £499 including the new 18-55mm IS II kit lens. We’ll have full test results as soon as the model is available to test.