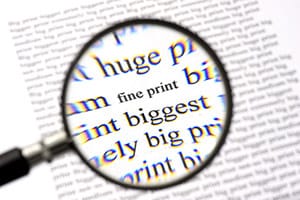 Be sure to check whether your bank shares its FCA authorisation with any others, as this will affect your savings’ protection

Which? is delighted that plans for the new financial services regulator, the Financial Conduct Authority (FCA), will put consumer interests at the centre of the regulatory process when it comes into force in late 2012.

The coalition government decided in June 2010 to divide the responsibilities of the Financial Services Authority (FSA) into three new bodies.

The Financial Conduct Authority (FCA) will operate as a consumer champion, alongside two other regulation bodies; the Prudential Regulatory Authority and the Financial Policy Committee, which will be based in the Bank of England.

Which? supports many of the government’s proposals which include plans to make the FCA a consumer champion and introduce some tough new powers for the regulator.

As part of the reforms the FCA will be able to take immediate action to ban toxic products for periods of up to 12 months.

Which? chief executive Peter Vicary-Smith said ‘it’s encouraging that the new regulator looks set to ditch the FSA’s hands-off approach to product regulation and be willing to intervene immediately to ban toxic products.’

The FCA will also publicise occasions where it has taken action against companies for misleading financial promotions.

Competition in the financial sector

Which? was instrumental in lobbying the government to get the regulator to be charged with promoting competition in the financial sector. This was a key recommendation of the Which? backed Future of Banking Commission.

Peter Vicary-Smith said ‘the FCA must proactively stand up for the interests of consumers and actively promote competition, so that there are stronger incentives to treat customers fairly and offer good value for money.’

We’re also pleased to see a commitment to ensure that appropriate expertise in consumer issues is available to the FCA. We’ve campaigned in the past about the lack of consumer representation on the board of the financial regulator so will be looking to ensure the FCA has a balanced approach.

The regulator will be led by Martin Wheatley, former chief of Hong Kong’s financial regulator.

Which? Money when you need it

You can follow @WhichMoney on Twitter to keep up-to-date with our Best Rates and Recommended Provider product and service reviews.

Sign up for the latest money news, best rates and recommended providers in your newsletter every Friday.

Or for money-saving tips, and news of how what’s going on in the world of finance affects you, join Melanie Dowding and James Daley for the Which? Money weekly money podcast

For daily consumer news, subscribe to the Which? news RSS feed here. And to find out how we work for you on money issues, visit our personal finance campaigns pages.