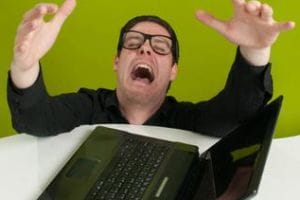 If your computer develops a fault that stops it working, panic can set in

Big name computer repair services from Best Buy, Carphone Warehouse, Comet and PC World have proved hit and miss in their ability to repair easy-to-fix computer faults, a Which? investigation has found.

Which? introduced realistic faults to popular brands of computer – 12 laptops and 12 desktop PCs in total – and took them to branches of Best Buy, Carphone Warehouse, Comet and PC World.

Not a single chain successfully diagnosed and repaired all the computers that Which? undercover researchers took to its stores.

Which? technology expert Ceri Stanaway says: ‘You’d expect trusted household names to have the know-how to cure most poorly PCs, so we were disappointed by the service we received on many visits. The near universal failure to repair our laptops means we can’t fully recommend any high street brand’s repair service.’

If your computer develops a fault, you may not need to resort to a professional repair service. Take a look at Which? advice on computer repair tips to try yourself before shelling out a fortune.

The software fault we introduced that prevented the laptops from booting up should have been simple to fix for any professional repair service – and no new hardware or software was needed.

But only a handful correctly diagnosed a software problem and just two stores – one Best Buy and one Carphone Warehouse – accomplished the perfect fix.

At least one repair service from each chain – and all the PC World stores we visited – misdiagnosed the problem saying we needed a new hard drive or motherboard. Two Comet stores declined to accept the laptops for repair – a Comet spokesperson later confirmed that Comet was unable to offer a repair service for the specific brand of laptop.

Desktop PC repairs were more successful. Nine of the 12 desktops were fully fixed. Which? researchers were particularly impressed with Best Buy. In all three stores, the disconnected hard drive cable was spotted and fixed quickly without charge – though one missed our secondary fault.

In contrast, one PC World store initially insisted we bought a new Windows disc before it would book the desktop in to be fixed, although it did eventually fix the problem free of charge and refunded for the disc.

Company responses to Which? findings

Which? put its findings to the four high street chains. In a positive response that is likely to benefit UK consumers, spokespeople for all four brands expressed disappointment with the failure of their services to correctly diagnose and repair all of the computers, and pledged to ensure appropriate training was put in place to address any issues.

Share your thoughts on the quality of computer repair services by joining the debate on Which? Conversation.

Our lab experts introduced realistic faults to each PC in our investigation:

Primary fault: A plug linking the hard drive cable to the motherboard was loosened, stopping the PC from booting. Re-inserting the cable fixes the fault.

The hard disk’s boot information was modified, with a value changed in the partition table, stopping the laptop from booting. Using the ‘repair’ option on the Windows Vista installation disc fixes the fault.