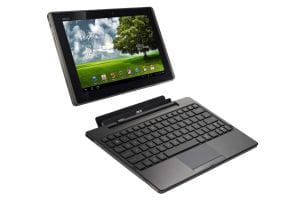 Asus has revealed its Eee Pad Transformer will be the first tablet to go on sale in the UK running Google’s Android 3.0 Honeycomb operating system.

The 10.1-inch Eee Pad can be used as a tablet on its own, or as a more traditional netbook-type device when docked in its keyboard base.

We first got our hands on this tablet at CES 2011 where it was originally unveiled – take a look at our .

The Eee Pad is due to just beat the Motorola Xoom, also set to launch next week, to be the first Android tablet on sale in the UK running the Honeycomb operating system.

It’s powered by a Nvidia Tegra 2 dual core processor and comes with 1GB of memory. Like the recently launched Apple iPad 2 it has front and rear facing cameras but unlike the iPad 2, it also runs Adobe Flash 10.2 for viewing online Flash-based video content.

It promises up to 16 hour battery life if you are using the keyboard dock, although alone the tablet claims a lesser nine and a half hours.

The 16GB wi-fi tablet will cost £379 or opting for 32GB of storage will set you back an extra £50. Both can be pre-ordered at Amazon and will be in stock from 6 April.

The device launching next week is wi-fi only, but a 3G version is due to launch in the coming months according to Asus.

Find out how the current crop of tablets compare in our extensive tests – the Which? tablet review will tell you all you need to know.