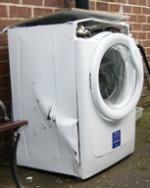 A fault causing Candy washing machines to explode in people’s homes was dismissed by Candy as ‘very, very rare’ – but Which? has learned of three cases in three months.

But Candy now accepts that machines from Hoover – which is part of the Candy group – that have a similar construction, and which were built in the same time period, may also be affected. And it is unable to guarantee that machines with a lower spin speed are free from risk.

The fault, which can cause the drum to tear free under the pressure of a high spin, appears to be caused by a poor welding of the drum. This can result in the drum tearing through the top of the machine and breaking any surface in its way.

After reporting five cases in Germany, Which? was contacted by three people in the UK whose machines suffered similar a fate. One woman standing close by at the time told us she’d suffered bruising to her back.

We’ve also seen comments from a washing machine engineer who claims to have seen ‘probably over 100’ cases over a six-month period.

The gallery below shows further details of the damage.

According to Candy: ‘Our analysis demonstrates that only a very small fraction of machines produced before September 2009 are likely to experience a failure of this type. That said, on occasion an incident may occur.’

Candy claims trading standards officers in Bolton, the authority dealing with the case, ‘haven’t had a problem’ with the way the issue is being dealt with by Candy, and that no further action is required.

A spokesperson from Bolton council told us: ‘Consumer safety is always our priority with regards to giving advice to businesses, but at the end of the day, it is up to the trader to decide what actions to take.’

We don’t think that enough action is being taken to ensure these machines are safe. Current advice to consumers is to call Candy’s helpline for ‘reassurance’ (0844 4995599), but Candy admits it’s unable to guarantee any one of its models is absolutely risk free.

What do you think about Candy’s approach? Join the debate on Which? Conversation – Would you keep a washing machine that might explode?

Which? needs your help

Candy says it has passed details of the number of cases on to the relevant authorities, but remains reluctant to provide the same information to Which? to help us gauge the scale of the problem.

If you’ve experienced a similar problem – or bought a high-spin Candy washing machine before September 2009 that you’d consider selling to us for testing – email homeeditor@which.co.uk with details.

Laundry and cleaning made easy

Which? independently tests appliances to help you choose the best products for tackling your laundry pile or keeping your home spotless. Read expert advice on:

For daily consumer news, you can also subscribe to the Which? consumer news RSS feed. If you have an older web browser you may need to copy and paste https://www.which.co.uk/feeds/news.xml into your newsreader.