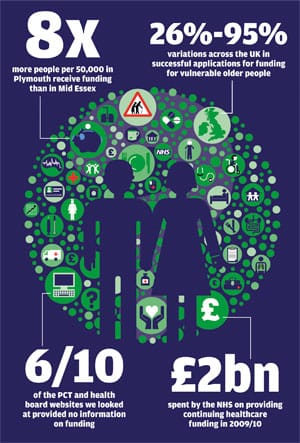 With as much as £50,000 a year at stake, it’s vital that those who need NHS continuing care funding get it. But new Which? research reveals access varies, depending on where you live

Those with the highest, most complex health needs are supposed to have their full care costs funding by the NHS, whatever their financial situation. But Which? research has discovered there are huge variations in care funding across the country.

For example, using Freedom of Information requests and analysing government data, we found that 8 times as many people per 50,000 in Plymouth receive funding than in Essex – an anomaly that can’t be easily explained by population differences.

The percentage of older people who were successful in their applications in 2009/10 ranged from 25% to 95% across Great Britain.

Which? research also suggests that primary care trusts are failing to meet their obligation to let people know about continuing care funding.

Specialist lawyer Lisa Morgan looked at 10 Primary Care Trust (PCT) websites, randomly chosen across Great Britain by Which?, and concluded that a poor 6 out of 10 made no mention at all of the funding even though they are responsible for providing it.

Barrister and director of the Solicitors for the Elderly Forum, Tish Hanifan, told us: ‘Time and time again our solicitors hear about a lack of information. The real postcode lottery can be in the information provision.’ She added: ‘The same person with the same needs could be teleported to a different area and get a different result.’

However, NHS London, which oversees the London PCTs, believes it’s more complicated than it seems. A spokesperson told us: ‘You have to look behind the numbers to see the many underlying reasons for the differences. For example, something simple like the average age of the local population impacts directly.’

But the strains of taking on a complex system at a time when you’re feeling most vulnerable can be immense. David Bury’s mother Irene died in 2006 but he is still fighting for what he believes to be a fair assessment of her needs, and the health ombudsman has asked the PCT to carry out the assessment all over again, with David getting an apology for the original maladministration of his mother’s case. David said: ‘After all these years, you lose faith in the system.’

And Mrs S, whose family want her to remain anonymous, is bearing the cost of her PCT’s near two year delay in agreeing she should get continuing care funding. There’s a shortfall of £10,700 which potentially breaches Department of Health guidance saying the person should not be worse off because of the PCT’s delay.

Worries for the future

With NHS reforms in England set to disband PCTs, there are worries about the arrangements for continuing care funding and the potential loss of the assessors’ expertise in using the complicated national framework. A spokesperson for the Department of Health told us: ‘We are currently working on transition arrangements for NHS continuing healthcare following modernisation of the NHS. We will confirm details in due course.’

We can help in other areas of healthcare, including if you are looking for an NHS dentist or want information for a hospital stay.