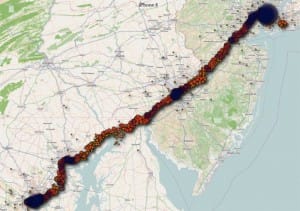 Apple has responded to recent accusations that it has been surreptitiously tracking people using the iPhone and iPad 3G.

Last week, researchers discovered a file stored on iPhones and iPad 3Gs that looked like recordings of the user’s location over time. The file is unencrypted and in some instances contains up to a year’s worth of ‘location’ data. Many speculated Apple was tracking its users, a claim Apple today denied.

‘Apple is not tracking the location of your iPhone. Apple has never done so and has no plans to ever do so.

‘The iPhone is not logging your location. Rather, it’s maintaining a database of Wi-Fi hotspots and cell towers around your current location, some of which may be located more than one hundred miles away from your iPhone, to help your iPhone rapidly and accurately calculate its location when requested.’

‘This data is sent to Apple in an anonymous and encrypted form. Apple cannot identify the source of this data.’

Share your thoughts on the story on Which? Conversation.

Though it denied tracking users, or rather admitted collecting location information but only anonymously, it did admit the amount of information stored was an error.

‘The reason the iPhone stores so much data is a bug we uncovered and plan to fix shortly. We don’t think the iPhone needs to store more than seven days of this data.’

Users also found the iPhone continued to collect location data after ‘location services’ on the iPhone were turned-off. Apple also claims this is a bug and plans to fix it in a future update.

Apple plans to release the free update ‘in the next few weeks’, and a future major update will encrypt the accused file on the iPhone as well.