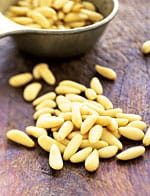 When Which? revealed that inedible pine nuts were being mixed with edible ones in China, causing  ‘pine mouth’ – a bitter aftertaste that appears after eating pine nuts – we were told it would stop. But it hasn’t.

After our revelation about the cause of pine mouth last year, we were told that measures had been introduced to prevent this from happening again. However, judging by the volume of correspondence we’re still receiving from people, it’s clear the problem persists.

We asked the Food Standards Agency (FSA) what was being done. A spokesperson told us: ‘There is now a list of accredited Chinese exporters to buy pine nuts from’.

However, there seems to be a lot of confusion regarding this list.

What the supermarkets told us

The Co-op, Sainsbury’s, Tesco and Waitrose told us that they now only use suppliers from the list. Asda said that it had approached the FSA for the list but hadn’t yet received it. M&S is liaising with the Chinese authorities, but also hasn’t received the list. Morrisons told us that it only imports two species of pine nuts, neither of which are associated with pine mouth.

We know where the list is and have passed this information on.

Have you recently been affected by pine mouth? If so, email us at foodeditor@which.co.uk and let us know where you bought the nuts and when.

Interested in healthy eating? Then find out which George Foreman grills, juicers and smoothie makers are best, as revealed by our expert tests.