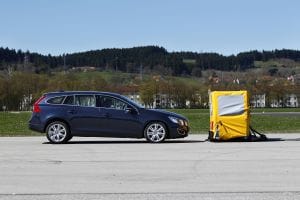 A Which? test of advanced car braking systems has revealed that they are capable of significantly reducing the severity of collisions.

Although all of the systems we tested were judged as worth having, they are also currently only available as pricey optional extras – although we hope that like electronic stability control, they will become a standard feature in the next few years.

View our video to see why electronic stability control is essential

The cars we tested were the Volvo V60, new Mercedes CLS, Audi A7, VW Passat Estate, BMW 530d and the Infiniti M37S.

They all come with equipment including radar sensors, cameras and lasers that recognise the vehicle in front and alert the driver if a collision is imminent. If the driver does not react and the collision cannot be avoided (by swerving), the system automatically brakes to reduce the speed of the impact or to prevent it altogether.

Out test looked at how well the advanced braking systems reduced impact speed as well as how effectively the driver is alerted to an imminent collision. We also looked at the reliability of the systems and for the chance of false alarms or unnecessary emergency braking.

The best overall system we tried, with a five-star rating, was Volvo’s City Safe. It showed a high potential to prevent crashes into stationary objects, performing well at high speeds with early warning alarms. At speeds of up to 25mph, it completely prevented the V60 from crashing. 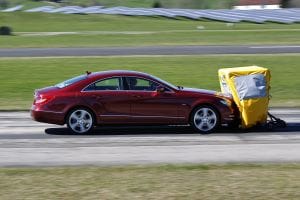 The Mercedes Pre-Safe and Audi’s Pre-Sense outperformed the Volvo in terms of cutting speed and lessening the severity of potential injuries, but couldn’t completely prevent a collision or come to a stop in front of stationary objects. The Mercedes system had the edge of the two, just scoring five stars, while the Audi earned a high four-star award. However, both manufacturers have announced their systems will be upgraded later in 2011.

The four-star VW Front Assist system in the Passat Estate took fourth place. It did stop in front of stationary obstacles, but only at very low speeds. At high speeds it was less reliable than we’d like – setting off the driver warnings too late or not at all.

BMW’s Adaptive Brake Assitant lagged behind the four top scorers, getting three stars. It warns the driver very early, but not very forcefully. If the driver does not react, it brakes only partially, reducing speed less effectively than the rival systems. With a stationary obstacle it did not brake at all.

The three-star Infiniti Intelligent Brake Assist was the poorest performer. It was ineffective in terms of warning the driver and reducing speed. One plus is the innovative accelerator pedal which pushes back against the driver’s foot if the distance to the car in front is inadequate – but this lacks fine-tuning and is likely to feel strange for most drivers (at present).

Read our guide to the best car safety features

While the overall results vary greatly, all of the advanced braking systems we tested are a safety plus. Even if they lower impact speed only minimally, any reduction at all can save lives.

We urge car manufacturers to introduce the systems more widely across their ranges, and reduce their cost, as soon as possible.

View our reviews of the tested cars: