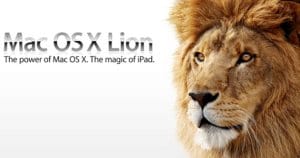 Apple has released the latest update to its Mac OS operating system, the software that runs on its Mac computers.

Called Mac OS X 10.7, aka Lion, it’ll cost £20.99 to upgrade and is only available as a digital download from its online Apple Mac App Store. But why make the upgrade?

Apple claims there are over 250 new features in OS X Lion, an upgrade from OS X 10.6 which was also known as Snow Leopard. Many of the new features are inspired by its mobile operating system, iOS used on iPhones and iPod Touches.

All new Apple Mac computers will come with OS X Lion pre-installed. If you’re thinking of buying a Mac, you can read our Apple MacBook laptop reviews and our Apple iMac review to see if they’re right for you.

Numerous bundled applications now support full-screen modes to help remove distractions when working. You can swipe instantly between full-screen apps using a gesture on the mouse or Magic Trackpad.

Apple has updated the bundled mail application for OS X 10.7. It now more closely resembles the Mail app on the iPad, and adds support for a conversation view that groups together replies to the same message chronologically. A new full-screen mode removes distractions when writing.

AirDrop is a new feature that allows direct wireless file transfers over wi-fi between two Mac computers, even if they aren’t connected to a wi-fi network. When activated a secure ‘ad-hoc’ connection is created between to computers, though both must be running OS X 10.7 for it to work.

Autosave continually saves changes you make to documents as you make them, removing the need to ever manually save files. Versions saves multiple snapshots of work as you go along, allowing you to view your current version and old versions side-by-side to see the differences and revert to previous drafts.

OS X 10.7 Lion has a new migration tool for people who are switching from Windows to Mac. It will transfer documents, contacts, calendars, email accounts (Outlook and Windows Live Mail) and photos stored in Picasa over your home network, adding them to the appropriate applications in OS X.

To install OS X 10.7 Lion your Mac needs to have an Intel Core 2 Duo, Core i3, Core i5, Core i7 or Xeon processor. Older Macs with Power PC processors will not work.

A minimum of 2GB of Ram is recommended and you must have at least 4GB of space free on your hard drive.

You must also be running the latest version of Mac OS Snow Leopard (10.6.8).

Thinking of buying an iPad? Read our full Apple iPad 2 review and our free Tablet Buyers’ Guide for all you need to know before you buy.