To coincide with the release of Mac OS X Lion, Apple has updated it ultra-portable MacBook Air laptop range and its small form-factor PC, the Mac mini.

Both updated products, in common with all Macs, will come with Mac OS X Lion (10.7) pre-installed. If you already own a Mac, OS X Lion is available to download from the Mac App Store for £20.99. For more info you can read our 5 reasons to upgrade to Mac OS X Lion for details of what you get.

Included in all new products is Thunderbolt, the new high-speed connection that Apple first introduced on its MacBook Pro range and iMac all-in-one computers. Developed in partnership with Intel, Thunderbolt is faster than other similar connections like USB 3.0 and FireWire.

Read our guide to Thunderbolt and USB 3.0 for more information on its features and how they compare. 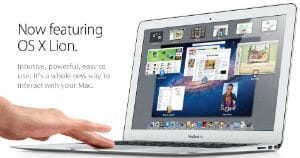 Another new feature is a backlit keyboard, which was previously only available on the MacBook Pro range. It makes it easier to type in dimly lit or dark rooms.

The updated range is on sale now with prices starting at £849 for an 11.6-inch MacBook Air and £1,099 for a 13-inch MacBook Air. Read our Apple laptop reviews to see how previous models performed in our tests.

See how Apple performs compared to other manufacturers in our best laptop brands guide, including how Which? members rate Apple laptops and their reliability. 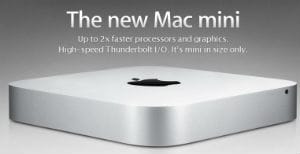 Like the MacBook Air, the Mac mini now features Intel Core i5 and i7 processors – albeit standard versions instead of the low-power variants in the MacBook Air range. Thunderbolt has also been added, but the most notable change is something that’s been removed.

Unlike previous versions, the updated Mac mini has no DVD drive. Due to the advent of the online Mac App Store and Apple’s iTunes film service, it’s taken the controversial decision to remove the drive. An external drive can be added, but it’s an optional extra.

There is some benefit to the change, though. As a result of the extra space created, the Mac mini has the option of more powerful dedicated graphics for playing games. Apple claims the new processor and dedicated graphics option make the new version twice as fast as before.

The updated Mac mini is available now from £529. The price does not include a keyboard or mouse.

Read our How to buy the best laptop guide for advice on what to consider when making your purchase.