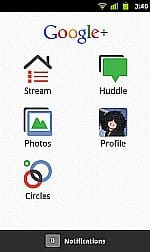 How the Google+ service will look on Android

Google+, the new social networking site from the search engine giant, has managed to pick up 18 million users in less than three weeks.

According to the calculations by Paul Allen, a statistician and co founder of ancestry.com, the world’s first credible rival to Facebook is forecast to exceed 20 million users in a matter of days.

Using a model which calculates Google+’ growth through surname-based analysis, Paul Allen estimated that the site was growing at a rate of 750,000 new signees a day. ‘This is down from a week ago, when people were joining at a rate of a million a day,’ Allen said.

Take a look at our Which? guide for tips on staying safe when social networking

Writing on his Facebook page, Paul Allen said: ‘My surname-based analysis shows that the number of Google+ users worldwide reached 7.3m [on July 10] – up from 1.7m on July 4. That is a 350% increase in six days.

‘More impressive than last week’s growth is the astonishing growth in users from July 6 to July 7 – a 30% jump.

‘I project that Google could reach 20 million users if they keep the invite button available. As one G+ user put it, ‘it’s easy to underestimate the power of exponential growth’.’

To keep up to date with the latest computing developments, take out a trial to Which? Computing