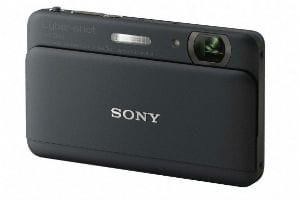 Sony has unveiled what it claims is the world’s slimmest compact camera, the new Sony Cyber-shot DSC-TX55.

Measuring just 1.2cm thick, the TX55 is certainly designed to slip into a pocket with ease. But Sony claims this portable model still makes room for a range of advanced features that includes its innovative panoramic photo mode, and very large OLED touchscreen that controls almost all aspects of the camera.

Not sure where to start when buying a camera? Read our guide to choosing and buying the best digital camera.

The new TX55 is certainly generous with the megapixels, offering a high resolution of 16.2Mp. While this should help the camera to capture detailed shots, we’d caution that you’ll be left with some large file sizes.

In order to save those files, Sony offers you the choice of recording to Micro-SD/SDHC cards, or to its own new Memory Stick Micro format. This is the first Cyber-shot camera to be compatible with Memory Stick Micro cards, and it can accept cards up to 16GB in size.

The TX55 allows you to capture wide panoramic photos using Sony’s Sweep Panorama technology – as you sweep the camera slowly across a scene, the TX55 will automatically stitch together a series of shots to create a wide panorama.

You can create 3D photos using a similar sweeping approach, though you’ll need a 3D TV to view them on.

One neat feature Sony has added is to allow you to capture 12Mp still photos while you’re in video mode. This means that if you’re capturing a movie and see a particular moment worthy of a still photo, you can snap it straight away without having to stop recording. 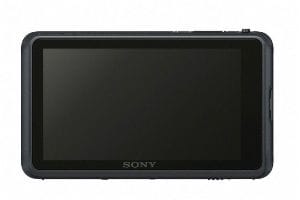 There’s still a zoom toggle button on top of the camera, allowing you to use the camera’s built-in 5x optical zoom or 10x “By Pixel Super Resolution” zoom. According to Sony, the latter offers an advanced digital zoom which lets you get closer to the action without compromising the image quality.

The screen itself uses Organic Light Emitting Diode (OLED) technology. OLED screens are slimmer, brighter, and sharper than traditional LCD screens, though in our expert testing experience, we have found that they still tend to reflect sunlight. A particular issue with touchscreens is how easily finger smears can be picked up, exacerbating the issue of the reflective screen.

We’ll wait until we have the TX55 in our test lab before making full judgement on the usability of the camera and its touchscreen. The Sony Cyber-shot TX55 is to be launched in September 2011, with pricing yet to be confirmed.

Read our expert Which? reviews of compact digital cameras to find a slim model that can take great photos.