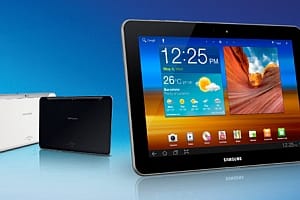 Apple, which has accused Samsung of intellectual property infringement, has had its complaint upheld by a German court meaning that the sales and marketing of the latest Samsung Galaxy Tab must be ceased.

The Samsung Galaxy Tab 10.1 is an Android tablet, and went on general sale in the UK on 4 August. Apple has claimed that the design of the tablet closely resembles that of the iPad.

As a result of the injunction, sales and marketing of the Samsung Galaxy Tab 10.1 must stop across the whole of the European Union, except the Netherlands, where Apple is reportedly making a separate lawsuit. This is due to different competition laws.

The preliminary injunctions are expected to take immediate effect in Germany and then filter across the rest of the EU. As of nine o’clock today, the Samsung Galaxy Tab 10.1 still featured on Samsung’s and a number of other shopping websites. Apple asked for a similar preliminary injunction in Australia, which has delayed the Australian launch of the Samsung Galaxy Tab 10.1. No new launch date has been published.

In this instance, the injunction concerns design-related intellectual property, rather than specific hardware or software patents. Intellectual property rights can be granted EU-wide, unlike patent law, which is more country-specific.

Samsung said: ‘The request for the injunction was filed with no notice to Samsung, and the order was issued without any hearing or presentation of evidence from Samsung. We will take all necessary measures to ensure Samsung’s innovative mobile communications devices are available to customers in Europe and around the world’. It is likely that Samsung will make an appeal against this ruling.

Do you think the Samsung Galaxy Tab 10.1 and the Apple iPad 2 are similar? See them in action in the videos below and read our lab-based tablet reviews:

See both the tablets in action in our first look videos, and decide for yourself how similar they are.