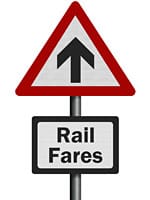 Regulated rail fares – such as season tickets and and long-distance off-peak tickets – are set to soar again.

The rise will come in January 2012, and will stem from the July 2011 Retail Price Index (RPI) inflation figure plus 3%.

That inflation figure has today been announced as 5%, so the average fare rise next year will be 8%.

Some fares to rise even more than 8%

This comes after substantial rises in January 2011, which saw some season tickets rise by over 12%.

Some fares will see even greater than 8% increases next year.

The reason for this is that train companies can increase some of their tickets in a ‘fares basket’ by up to an extra 5% above inflation.

They can do this as long as others fares decrease making the company’s overall average increase 8%.

The first of three years

Regulated fares used to be calculated at RPI inflation minus 1%; it then became RPI plus 1%.

This new formula is RPI plus 3% although this differs for some lines. The plus 3% calculation will continue for three years.

The extra revenue raised from these increased fares will go to the government.

Rail Minister Theresa Villiers defended the increases by saying the government ‘has had to take some very difficult decisions on future rail rises but the long-term solution is to get the cost of running the railways down.’

The recently published McNulty Report, commissioned by the government, found that the rail industry should be 30% more efficient by 2019, with annual cost savings by then of around £1bn per year. 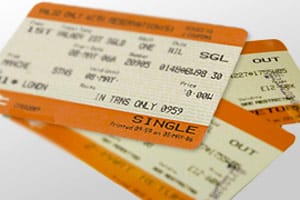 However, there is no link between what you pay and the service you get.

It’s possible for your journey to be one of those hit with the highest rises for several years, even if it performed poorly compared to other routes.

Director David Sidebottom said: ‘The way that train companies are allowed to set fares on individual routes is deeply unfair.’

Get the best fares

To get the best value tickets, read our free cheap train tickets guide.

To get to the bottom of the inflation figures, we’ve put together a free 60 second guide to inflation.

Tell us what you think about the price rises, and take our poll on whether they will stop you travelling by train, at the Which? Conversation