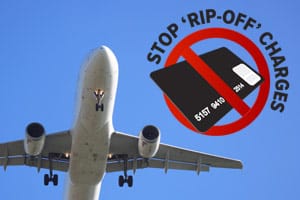 Consumers are still paying more than £265,000 per day in debit card surcharges to airlines, despite a ruling by the OFT that they should be banned, according to new Which? research.

We submitted a super-complaint to the Office of Fair Trading (OFT) in March 2011, asking the regulator to investigate excessive credit and debit card surcharges.On 28th June, the OFT responded and proposed that charges for paying by debit card should be banned. A simple amendment to existing Payment Services Regulations by the Treasury would achieve this.

Consumers continue to be hit by unfair charges

The government still has not taken action and consumers continue to be hit by excessive card fees. Unbelievably, two airlines – Swiss and Lufthansa – have announced plans to start charging customers for using debit and credit cards since the OFT response.

Richard Lloyd, Which? executive director, said: ‘With most airlines yet to drop these card surcharges and some introducing new fees, it’s time for the government to put a stop to this. A minor change to the law is all it would take to ban the charges on debit cards that you only find out about at the end of a lengthy on-line booking process.

‘Thousands of people have complained to Which? that these hidden card fees are unfair. The Government must act so that consumers can easily compare the cost of their flights.’

Which? is asking people to pledge their support for Government action by emailing Financial Secretary Mark Hoban: see www.which.co.uk/surcharges