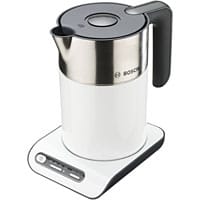 Which? has been scouring the web this week for the best online deal on the Bosch TWK8631GB kettle.

In the spirit of our tackle tariffs campaign – where we are encouraging energy companies to simplify their gas and electricity tariffs – and given the recent price rises announced by all the major energy suppliers, we’ve tracked down a great deal on the energy-saving Bosch TWK8631GB kettle.

When we tested the Bosch TWK8631GB kettle in the Which? test labs we were impressed by its energy-saving efficiency.

It allows you to boil as little as 300ml of water – ideal if you just want to make a cup of tea for one – and then smartly switches off immediately after boiling. It also has a keep-warm function that means the water retains heat longer, reducing the need for re-boiling. All in all it should use less electricity and give you a cheaper cuppa.

We put all the kettles we review through rigorous testing in the Which? test lab. This includes measuring not only energy-efficiency features, such as electricity used and how long the kettle takes to boil, but also the overall ease of use.

It total we’ve reviewed 169 different kettles, and recommend the top 41 as Which? Best Buys. Around 20 of these are also awarded our coveted Energy Saver logo which we award to the best energy-saving kettles.

Priced £69.99 at most retailers, including Best Buy and Currys, we found the kettle on Pixmania for just £53.90, including delivery.

Elsewhere, Comet is currently advertising the Bosch TWK8631GB as reduced to £49.99, but despite listing it as in stock we were unable to find availability at stores up and down the country. Pixmania is the best deal around.

Spotted the Bosch TWK8631GB kettle for less elsewhere, or found a great bargain on a kettle? Email bargains@which.co.uk with the details and we’ll update this page. All prices correct as of 3pm, 28 September 2011.