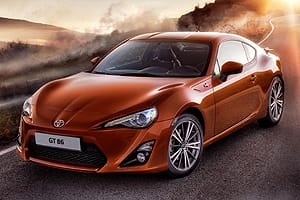 The Toyota GT86 is a rear-wheel-drive coupé

After literally years of concepts and speculation Toyota has finally revealed the production version of its new GT86 sports coupe.

Going on sale in June 2012, the new Toyota GT86 sports car is aiming to provide back-to-basics driving thrills in a compact, 2+2 seater package.

Toyota says it has conceived the GT86 with the intention of ‘recapturing the joys of motoring’. This means light weight, low centre of gravity, and a rear-wheel drive layout – all of which are play their part in delivering a driver-focused car.

Powering the sports coupe is a 197bhp Boxer engine – the design of which allows it to be mounted lower down in the car. This contributes towards a lower centre of gravity, which in turn improves handling characteristics. Complemented by a near-perfect front/rear weight distribution, the GT86 should have a nimble persona and a well-balanced feel.

The 2.0-litre engine is a non-turbocharged four-cylinder, which Toyota claims is lively and free-revving. Peak output comes at 7,000rpm, with its 151lb ft maximum torque delivered slightly earlier at 6,600rpm – meaning you will certainly need to work it hard to get the best out of it. 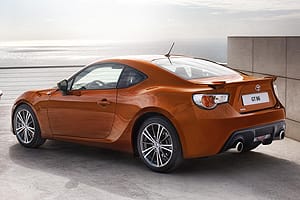 Either a manual or automatic gearbox can be specified – both of which are 6-speed units. Steering wheel paddles can be used to change gear with the latter configuration.

Toyota developed the GT86 in partnership with Subaru, which has its own version of the car called the BRZ. The two are separated by styling, but otherwise very similar.

According to Toyota, the modest dimensions of the GT86 will make it the most compact four-seater sports car when it goes on sale in June 2012.

Prices should be announced at its official unveiling at the Tokyo Motor Show later this week (along with fuel economy and emissions figures), but are expected to start at around £28,000.