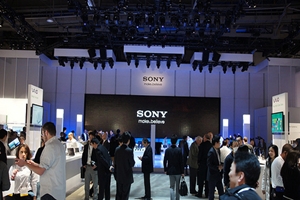 CES 2012 got underway on Tuesday as the tech world’s big hitters unveiled their flagship products for the year. We round up five product highlights from CES on day 1.

From the rise of the tablet laptop hybrid to the return of the camcorder, our tech team is out in Las Vegas reporting on all the major news and getting their hands on the new tech products. You can read about the latest developments in our latest news from CES 2012 live news feed or see the CES 2012 highlights below.

Toshiba is a relatively new entrant into the world of tablets but their Excite X10 is proof they know what consumers want. Promoted as the thinnest and lightest 10-inch tablet yet – two titles it’s sure to lose quickly – the Excite X10 feels like a solid tablet with a specification set to rival competitors.

Running on the Google android operating system, it has a fast dual-core processor and a range of storage capacities starting at around 16GB. You can find out more and see the Toshiba Excite X10 in action in our Toshiba Excite X10 First Look video.

In what’s being dubbed the year of the ultrabook, Samsung has released the second generation of its flagship Series 9 line. This includes an update to their 13-inch ultrabook and a brand new, bigger 15-inch model.

Samsung has unveiled a slew of TVs at CES 2012, but its flagship ES8000 LED TV is generating much of the attention thanks to its claims to be future proof.

Set to launch this year, it’s a 55-inch Smart TV with gesture and voice control – allowing you to control the TV with your voice or – thanks to a camera sat on the top of the television – your hand. Samsung is claiming the product is future proof thanks to the ES8000’s ability to have upgraded software plugged in. It’s an impressive development – although the ES8000 will remain susceptible to hardware improvements. You can find out more about the Samsung ES8000 LED TV and see the TV in action in our Samsung ES8000 LED TV First Look video.

We’ve seen tablet and laptop hybrids before but it’s only this year at CES that manufacturers seem serious about producing practical products around the concept.

The Lenovo Ideapad Yoga is essentially a 13-inch ultrabook with a flexible hinge that rotates 360 degrees and allows the Yoga to be folded into a tablet. The hinge also allows for the device to be bent into a tent shape, which could be useful for film and TV watching. You can find out more about the innovative Lenovo Ideapad Yoga and see the hybrid in action in our Lenovo Ideapad Yoga First Look video.

With the rise of smartphones and there increasingly powerful video recording abilities, camcorders have been swiftly sliding out of fashion with consumers. Yesterday, Sony attempted to breathe new life into the camcorder market with its Sony Bloggie Live camcorder that features live video streaming.