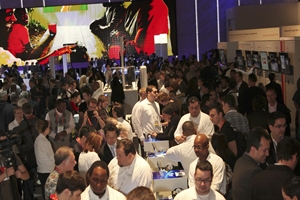 CES 2012 gave plenty for our tech team talk about today, as they got hold of more gadgets causing a stir in Las Vegas – from ultrabooks to smartphones. We round up five product highlights from day 2.

With most of the big product announcements on press day at CES 2012, day two was all about trying out the new products.

Famously reluctant to enter the ultrabook market, Dell has finally given in and released its first ever ultrabook – the distinctive Dell XPS 13. It’s an impressive first attempt.

Featuring a striking design that eschews the current trend in ultrabooks to mimic Macbooks, the XPS 13 runs on a choice of Intel Core i5 or i7 chips and packs a 128GB or 256GB SSD. That’s a powerful combination that should make the XPS 13 a very speedy machine.

Find out more about the Dell XPS 13 and see it in action in our Dell XPS 13 first look video.

It’s been a year of slimmest and smallest at CES 2012, and Canon has offered up its own slimline product in the form of the Canon PowerShot 520 HS – the world’s slimmest digital camera with a 12x optical zoom.

Measuring just 19mm thick, it’s quite an accomplishment to fit a 12x inside this 10Mp camera’s compact body.

LG is a relative newcomer to the laptop and ultrabook market – especially in the UK – but it might be set to make an impact with its LG Z330 and Z430 ultrabooks.

The flagship Z430 is a 14 inch ultrabook with a choice of an i5 or i7 Intel core processor – as is becoming standard on ultrabooks. More impressively, it boasts both a SSD hard drive – for speedy access – and a standard HDD hard drive for extra storage.

Taking a lead from the boom in smartphone and tablet sales – Asus has decided why have one when you can both with their Padphone – half smartphone, half tablet.

The Asus Padphone gives you separate smartphone and tablet devices that can be docked together, allowing you to combine the best features of both devices, synch any data and use a single Sim card and data plan.

One Laptop Per Child

Something you won’t be seeing in your local shop, but something we’re very glad to see coming to fruition – the idea behind one laptop per child is simple, to provide the world’s poorest children with a low-cost laptop.

The device to deliver this aim is the OLPC XO-3 concept laptop. Closer to a tablet in appearance and featuring a lid that acts as a solar panel, the X0-3 has more than 300 apps, a web browser and target price of $100.

Find out more about the OLPC XO-3 and see it in action in our OLPC XO-3 first look video.