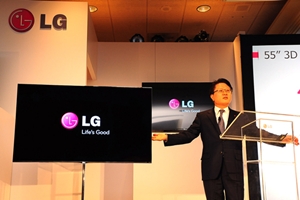 CES 2012 got off to its usual frantic start on Monday – or press day – traditionally a day of blockbuster news, innovation and products. We round up the top 5 product announcements for you.

Officially, the show doesn’t start until today, at 18:00 UK time, but our technology team is already reporting live from Las Vegas – find out the five key products and trends they’ve spotted and follow all the latest news from CES 2012 in our live news feed.

Ultrabooks – Acer thinner than ever

With tablets killing off netbooks and putting laptop sales under pressure, ultrabooks – smaller, lighter and longer lasting laptops – have been tipped to lead the computer fight back. This year at CES, we expect to see a slew of Ultrabooks – and we haven’t been disappointed so far.

On Monday, Acer wheeled out the Acer Aspire S5 – the thinnest ultrabook yet, measuring just 15mm at its thickest and weighing 1.45 Kg. Elsewhere, we got our hands on the HP Envy 14 Spectre, which is HP’s attempt to capture the premium end of the ultrabook market.

Over the last few years, CES has been dominated by TV announcements and there’s a sense that consumers have a little TV fatigue – especially about 3D TV. This year, we’re seeing smaller, slimmer models with better screens and more Smart TV functionality.

The star of the show on press day was a new OLED TV from LG – a 55 inch TV that’s just 4mm thick yet has a contrast ratio of over 100,000,000:1.  The South Korean manufacturer also announced that over 50% of its TVs now come with Smart TV and 3D TV functionality.

Smart TV – the integration of apps and internet functionality – has been appearing on an increasing number of TVs but, so far, the quality and services on offer have been patchy.

This year could see a breakthrough in the technology, with announcements from Samsung that it’s developing more apps for its TVs and introducing voice and gesture control, and news that LG is tieing up with Google to offer the Android operating system on its Smart TVs. We also heard from British firm Canonical, which is looking to offer Ubuntu TV as a Smart TV operating system – it’s a move that could deliver more budget-priced Smart TVs.

We’re expecting tablets to be the flagship product at CES 2012, with more announcements – including a possible Windows 8 tablet – in the coming days. One particular trend is for hybrid tablet and laptop – essentially tablets that dock or slot into a keyboard. The idea is to make typing on the tablet easier and make tablets more competitive with laptops.

The first of these hybrids to be announced on Monday was the Lenovo Ideapad S2 – a 10 inch tablet with a 1.5 GHz dual core processor and up to 20 hours of battery life.

An upgrade from Canon on its Powershot range promises DSLR quality photos from a compact camera body. The new Canon G1 X has a massive 14.3 Mp CMOS sensor fitted inside– similar to the sensors found inside a digital SLR camera.