Toyota has updated its eco-focused Prius hybrid for 2012, overhauling the vehicle inside and out.

The Prius’ driving dynamics have also been revised, however, the car still retains lowest CO2 emissions in the large cars class thanks to its hybrid powertrain. 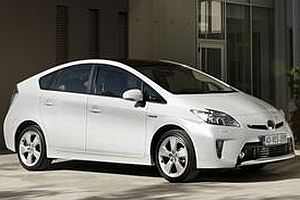 Clear-lensed headlights also feature, sharpening up the Prius’ aesthetics, and the car’s LED daytime running lights have been relocated to the bumper.

The styling revisions have added an extra 2cm to the car’s length, but the Prius’ aerodynamic performance is unchanged ensuring fuel economy and efficiency remain as strong as ever. 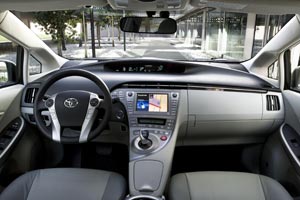 The interior looks to be much improved

On the inside, Toyota has treated all Prius models to more standard equipment, including a touchscreen monitor that controls the audio and communication interfaces and is equipped with Bluetooth connectivity and a rear parking camera.

The new Prius can still be bought in T3, T4 and T Spirit trim levels. T Spirit now comes with the Touch and Go Plus system as standard. This features satellite navigation with advanced traffic pattern intelligence, voice recognition for phone calls, music search and play, and the ability to perform Google Local searches, relaying information on the car’s surroundings. The system can be had as an optional extra on T3 and T4 models, too.

Alongside improved levels of technology, Toyota has focused on upping interior quality on the new Prius.

The front seats offer a greater range of adjustment, and the centre console ‘box’ has been redesigned, improving the cabin’s ergonomics. 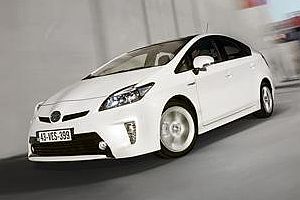 The Prius’ chassis has received attention as part of the new car’s development with the bodyshell stiffened to improve rigidity. The suspension has been retuned too, to improve ride comfort, according to Toyota.