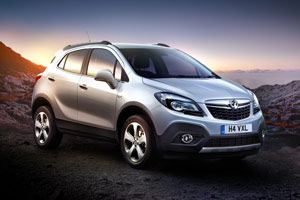 Read the updated first look review of the Vauxhall Mokka and watch all our car launch videos from the Geneva Motor Show 2012.

The first official images and details confirm that’s it’s targeted squarely at the Nissan Juke. Vauxhall’s high-caffeine newcomer will make its debut at the Geneva Motor Show 2012 and will arrive in UK dealerships by the end of the year.

And it may well have the go to match the show, as Vauxhall will offer its new mini-4×4 with an all-wheel-drive system, and an electronic stability control package that includes an off-road-orientated hill descent control. Cheaper (and more fuel-efficient) front-wheel drive variants will also be available. 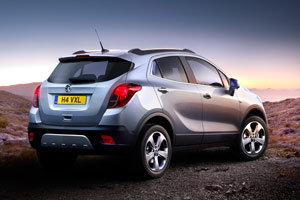 While Vauxhall has released no images of the Mokka’s interior so far, it says the new car will seat five in comfort – despite its modest 4.3m length.

There are no less than 19 storage areas onboard, while total boot space with the rear seats folded sounds impressive at a claimed 1,373 litres. It also has a wide track for its size, which together with 18-inch wheels as standard on most models bodes well for its dynamic agility (if not necessarily ride comfort).

Perhaps more interesting, however, is the Mokka’s technology. 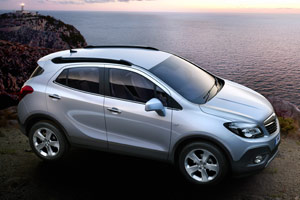 Technology seems likely to be a major selling point for the Mokka, and Vauxhall has certainly made a big effort to cram it in.

Vauxhall’s unique FlexFix integrated bicycle carrier system will also be available, popping out from beneath the rear bodywork. This, and much of the other exciting, kit is likely to be relegated to options list, though.

There’s no word on pricing or trim levels yet, but the Vauxhall Mokka is scheduled to go on sale in the UK before the end of the year.