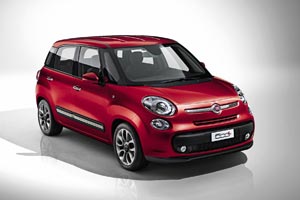 Read the updated first look review of the Fiat 500L and watch all our car launch videos from the Geneva Motor Show 2012.

Fiat’s 500 has made a name for itself as one of the best city superminis. Now it’s growing up and becoming a compact MPV with the addition of an L to its name.

According to Fiat, the 500L has been designed to combine the passenger space of a conventional MPV, the feel of a small SUV and the efficiency of a supermini.

The 500L – the L stands for Large – builds on Fiat’s heritage for compact people carriers that dates back to the 1956 600 Multipla. But the 500L will be based on a new platform rather than an enlarged version of that underpinning the existing Fiat 500. 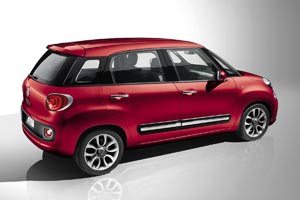 The Italian manufacturer’s compact MPV will be powered by a choice of three engines – one turbodiesel and two petrol units.

Expect the firm’s 1.3-litre MultiJet II diesel to be the most fuel-efficient – in the 500 hatchback, the 95bhp version returns a claimed average of 72.4mpg and emits 104g/km of CO2.

But the 0.9-litre two-cylinder TwinAir petrol unit should run it close. In the 500, the 85bhp TwinAir promises 68.9mpg combined and 95g/km CO2. A more conventional 1.4-litre petrol engine will also be available in the 500L.

Fiat has not yet released any claimed fuel economy or emissions data for the 500L, but expect it to be thirstier than the 500 hatchback because it will weigh more.

Bigger than a Panda

Buyers can expect the 500L to feature equipment levels similar to Fiat’s similar but smaller new Fiat Panda. This would include the Italian manufacturer’s city braking system – a feature that automatically applies the brakes at urban speeds to prevent a collision – and portable sat nav unit.

Pricing and full specifications are set to be revealed later in the year, as the new compact MPV doesn’t go on sale until the last quarter of 2012.