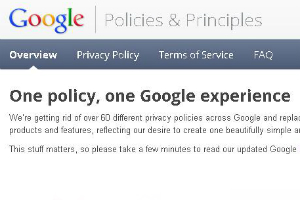 Google has abandoned over 60 privacy policies used to cover its various products in favour of a single policy that it says is “shorter and easier to read.”

Where Google says that the single policy makes for a ‘simple and beautiful experience,’ privacy campaigners have called on the Information Commissioner’s Office (ICO), the UK’s data watchdog to investigate the policy believing it may contravene European data protection laws.

A French regulator, CNIL, said that the new single privacy policy “raises deep concerns” and may violate the European Data Protection Directive. As well as implementing a single privacy policy Google is pulling together everything that it knows about you from across its services. CNIL says it is “deeply concerned about the combination of personal data across services.”

Privacy watchdog Big Brother Watch has added its voice to Google’s critics, asking the ICO to investigate the terms of the new privacy policy.”We have called for the company to not implement the new policy until its impact is fully understood and consumers can be confident there is adequate privacy protection in place.” says a statement by Big Brother Watch.

The Article 29 Working Party, a watchdog group of data protection authorities from EU member countries, has called for a pause in the implementation of the new policy to ‘check the possible consequences for the protection of the personal data of citizens.’

Google has defended its new privacy policy against its detractors. “Over the past month we have asked to meet with the CNIL on several occasions to answer any questions they might have, and that offer remains open,” said a spokesperson for Google’s policy department. “We believe we’ve found a reasonable balance between the Working Party’s recommendations: to ‘streamline and simplify’ our policies while providing ‘comprehensive information’ to users.

Lack of understanding among Google users

Despite Google’s efforts to simplify its privacy policy into one all-inclusive document, there remains an issue of how many Google users are taking the time to read and understand the policy.

“Much more needs to be done to inform consumers what these changes mean, and how they can take control of users’ personal information. The impact of Google’s new policy cannot be understated, but the public are in the dark about what the changes actually mean,” said Big Brother Watch.

A survey commissioned by Big Brother Watch reveals that, regardless of its shorter form, nine in ten people hadn’t read Google revised privacy policy, which is still 2,270 words long, despite Google previewing it in the weeks leading up to its launch.

Which? policy advisor Rob Reid welcomes the idea of simplifying online privacy policies, but cautions that they must still offer all necessary protection to online users.

“The simplification of Google’s privacy policies may help ensure that consumers are more aware of the privacy implications of using its products and services,” Rob said. “However, it is essential that the new policy is fit for purpose given that it now covers such a vast range of services.”