New research by the Institute of Advanced Motorists (IAM) claims using smartphones for social networking while driving is more dangerous than drink-driving or being high on cannabis behind the wheel. 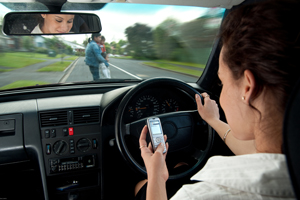 Using a phone at the wheel is all too common

Despite the legal ban on using mobile phones while driving, 24% of 17-24-year-old drivers – a group already at higher risk of being in a crash – admit to using smartphones for email and social networking while driving, according to research published today.

The study by the IAM used a driving simulator to see how reaction times were changed if the driver was attempting to access social networking sites while driving.

Participants were unable to maintain a central lane position, resulting in an increased number of unintentional lane departures. They were also unable to respond as quickly to the car in front gradually changing speed.

The study then compared the outcomes with other studies of the level of impairment on driving for drivers who have consumed alcohol, taken cannabis, or are using a phone to text. The results were:

The IAM is calling for government action to highlight the dangers of using smartphones behind the wheel. Phone manufacturers and social network providers also have a key role to play in spreading the message.

“Which? has been active in working to improve occupant safety in cars for very many years. This includes campaigning for seatbelts, to our work as founder members of Euro NCAP and our unique work to raise standards of protection offered by child car seats.

It’s all about changing attitudes and the IAM’s work shows that however safe cars are, educating drivers is critical to reducing the risks they face when driving.

Maybe there needs to be more action to enforce the existing ban on use of mobile devices while driving. Simply having the law passed doesn’t seem to have been very effective so far. Better enforcement must be coupled with education, to help change attitudes – in a similar way to changes achieved around seatbelt use and drink driving.”