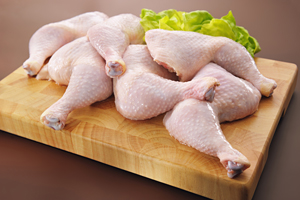 One in five supermarket chickens tested by Which? were contaminated with campylobacter.

And 17% were contaminated with listeria – both of which can cause food poisoning.

Of the 192 samples tested by Which? 1.5% also tested positive for salmonella.

Which? tested whole chickens and chicken portions from nine supermarkets in March 2012. Of the 192 samples:

The Which? study was a snapshot, testing chicken samples from all the major retailers – Aldi, Asda, The Co-operative, Lidl, Marks & Spencer, Morrisons, Sainsbury’s, Tesco and Waitrose.

The chicken samples were bought on two days in different locations. Bacterial contamination was found in samples from every retailer tested.

Although not a directly comparable test, the Which? results indicate an improvement on 2009, when the FSA found that 65% of fresh chickens it tested were contaminated with campylobacter at the point of sale.

Which? executive director Richard Lloyd said: ‘While the situation is improving, it is unacceptable that one in five chickens we tested were found to be contaminated with campylobacter.

‘We want to see the risk of contamination minimised at every stage of production, because for far too long consumers have been expected to clean up mistakes made earlier in the food chain.’

There were 84,560 recorded cases of food poisoning in England and Wales in 2010.

But the actual number is expected to be much higher, as many people who get sick don’t seek medical help. Those who do aren’t always screened.

In fact, the FSA estimates that campylobacter – the most common cause of food-borne illness – was alone responsible for 371,000 cases of food poisoning in 2009.

The bacteria campylobacter, listeria and salmonella are easily transferrable and, although they are killed by cooking, most illness occurs from incorrect handling and cross contamination.

How you can protect yourself from food poisoning:

In theory, manufacturers could reduce bacterial contamination by treating chickens, eg using chemicals – but our research shows that most consumers wouldn’t be willing to buy chickens treated in this way.

For instance, not everyone is keen on having their chicken treated chemically, and manufacturers don’t want to introduce treatments that their customers aren’t happy with.

A Which? survey of 1,406 UK adults showed that 82% of the public want controls in place throughout the food chain so that chickens aren’t infected – rather than dealing with contamination at the end of the process.

But when asked about specific treatments, 59% said they were unlikely to buy chicken treated with safe levels of irradiation.

People were more accepting of stream treatment, with 59% saying they were likely to buy a steam treated chicken.