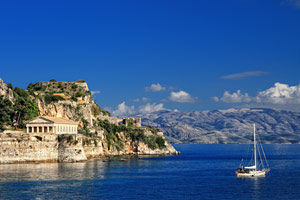 Booking a package holiday should give you the best protection against Greece’s financial and political troubles.

Greek tourism officials this week urged British holidaymakers to forget the country’s economic crisis and pay a visit, promising they would be able to make financial transactions as normal throughout the summer.

Their promise came as the prospect of Greece leaving the Eurozone came closer as European Union officials were reported to have advised each member state to prepare contingency plans for a Greek exit.

So does the prospect of Greece leaving the euro mean you should avoid it as a holiday destination or take advantage of its crisis to grab a cheap deal?

No one knows if Greece will indeed leave the Euro, although Graham Pickett, a partner at financial services firm Deloitte, told a travel industry conference this week that it was a question of ‘when, not if’ it happens.

However, that wouldn’t be a ‘disaster’ for tourists, according to Pickett. Banks would close for up to five days – possibly over a planned public holiday – while the exchange rate was fixed. But as long as tourists had cash they would be unaffected.

Hotels, restaurants, shops and tavernas would continue to accept euros during the shut down and beyond.

So it would be advisable to take plenty of euros in cash, and to take smaller denominations of currency rather than high value notes. This is because although you might pay in euros, traders would be likely to give you change in the lower value Greek currency.

If you are thinking of going to Greece, we advise buying a because it will give you more protection than putting your own trip together independently.

If you’ve bought a package and something does go wrong, such as flights being because of strikes, your tour operator will have a responsibility to get you home if you are in Greece.

Tour operators will also have to find you a suitable equivalent holiday or a full refund if it is impossible to travel because of strikes or because the situation in Greece has become so bad they can no longer guarantee you a safe, secure and enjoyable holiday.

The UK’s two biggest tour operators Thomson Holidays and Thomas Cook have said they have contingency plans to cope in the event of a Greek exit.

The big tour operators, and medium sized Greek specialists, such as Sunvil, will also have reps on the ground to provide help and advice.

If you do book independently, make sure you pay with a credit card, so you will be protected under Section 75 of the Consumer Credit Act and will be refunded if you are unable to take your holiday.

You should also make sure you travel insurance includes supplier failure cover, so even if you have put the trip together yourself, you will be refunded if you are unable to take the holiday because a hotel has gone bust.

Sales to Greece have dropped this year for some UK operators reporting numbers down by about 12%. The number of visits by German holidaymakers has fallen even further and hotels have cut prices, with reductions of up to 50% reported.

The Association of Greek Tourism Enterprises (SETE) said that as well as cutting prices, hotels were offering added benefits such as extra meals or free child places.