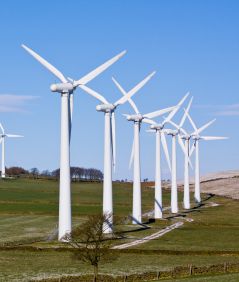 The government has cleared the way for the largest onshore wind farm in England and Wales to be built in South Wales.

The new wind farm will be built at Pen y Cymoedd, between Aberdare and Neath, and will generate enough electricity to power more than 200,000 homes.

Which? energy expert Sylvia Baron says: ‘If you’re interested in installing your own domestic wind turbine check out our guide on how to install your own wind turbine including the pros and cons of doing so.’

A recent Which? Conversation about wind farms showed a passionate range of opinions. These include:

‘Much of our open moorland and rugged fells sort of country is highly protected and valued as a treasure by many members of the country’s population so to build in that sort of landscape would disturb them – and it would disturb the residents of these regions too.’ Chloe Pink

‘This is not just about the economic generation of reliable energy supplies, it’s about the survival of the planet as we know it through the stringent reduction of carbon emissions, and to that end every little counts.’ John Ward

Join the Which? Conversation and let us know what you think about wind farms – do you think they’re vital for the environment or a blot on the landscape?

The wind farm will be made up of 76 turbines that will be up to 145 metres high. It should be producing electricity by 2016, will have a total capacity of 299 megawatts (MW) and will be the highest generating onshore wind farm in England and Wales.

A joint report from the government and industry body RenewableUK, highlighting the economic and community benefits of onshore wind, paved the way for the project to be given the go-ahead.

The site is being developed by Vattenfall who have pledged £3 million for habitat management and £6,000 per year to be paid into a community fund for each megawatt of electricity generated.