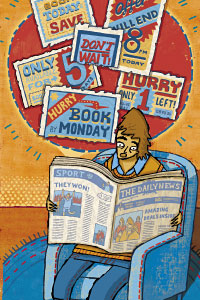 Promotions in newspapers and email offers often scream ‘Hurry!’ as they dangle the prospect of savings in front of readers who are prepared to book their holiday fast. But we found that they can be misleading.

When Which? Travel monitored adverts in weekend newspapers, we found that for 43% of the adverts urging readers to hurry, we were able to find some of the deals at the same price or lower after the offer had finished.

Which? Travel monitored newspapers over four weeks in April and May and found 30 holiday adverts that either used the word ‘hurry’ or were time limited with a specific cut-off date.

For 13 of those, we found deals costing the same or less than in the original ads after the offers had finished – suggesting that there was no need to hurry after all.

We also looked at email offers sent to the inboxes of the Which? Travel team, and in some cases found better deals after the sale period had ended.

Newspaper examples included a Reader Offers advert for a cruise that urged readers to ‘book today’, stating that the offer would end at 8pm on 17 April. But nine days later we found that 12 of the 16 fares quoted in the advert were the same or cheaper on the company’s website.

Similar issues arose with newspaper adverts from P&O Cruises and Warner Leisure Hotels. We looked at three P&O adverts for 27 separate cruises, and found seven of the cruises at the same or lower price after the cut-off date had passed.

A Warner Leisure Hotels advert on 28 April told readers to ‘Hurry, book by 1 May 2012’. But when we checked on 11 May, we found five of the eight breaks still available at lower prices than the original offer.

We also looked at email offers, including examples from Princess Cruises and Thomson Al Fresco.

The Princess offer of 18 April said the deals were available for five days only – but three weeks later we found examples of the same cruises at the same price. On 11 May another sale started, with some of the same holidays at cheaper prices.

Thomson Al Fresco sent out an email offer on 20 April saying that bookings had to be made by 30 April. But on 10 May we found one of the holidays still available at the same price, and another that was cheaper.

Which? Travel thinks it’s misleading to tell people to hurry when the same or lower prices will be available after an offer ends.

And we don’t think it’s enough for companies to try to cover themselves by stating in the small print that prices can vary.

Reader Offers said it would use ‘even more stringent’ checks on its adverts as a result of our research. It said the economic climate meant cruise companies were extending promotions if not enough seats were sold.

P&O said it would look at how similar promotions were presented in future. Warner Leisure Hotels said it would investigate what had happened and said it had not intended to confuse customers.

Princess Cruises also said it would consider future presentation of time-limited promotions. Thomson Al Fresco said its prices were correct ‘when broadcast’, and it had to cut prices on one of the holidays to try to sell the remaining places.