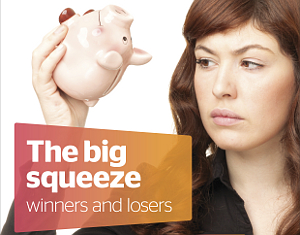 The Which? Quarterly Consumer Report shows consumers spend a week a year worrying about money. Read the full report at www.which.co.uk/wellbeing

The Which? Quarterly Consumer Report has found Britons are now amongst the most economically vulnerable consumers in Europe, with just 53% saying they are ‘satisfied with life’.

The results of the first report published today found that squeezed consumers spend more than seven whole days every year worrying about money. The report also found that debt levels are at their highest since the 1980s, with Britain’s households owing £1.5 trillion.

Which? executive director, Richard Lloyd, said: ‘Consumers in Britain are going through the tightest squeeze in their living standards since the 1920s. Many consumers are clinging to the edge of a financial cliff with savings at rock bottom and personal debt levels sky high.’

Overall, it was found that women and young people aged between 18 and 29 are suffering from the highest levels of debt. As a result, they have also felt the largest impact to their living standards. The report found that for every pound earned in this group, 47p was owed, compared to a national average of 21p.

One in ten young people also said they had defaulted on a bill, while 45% said they ran out of money every month (compared to 38% of consumers on average). In response, Which? and other consumer groups are calling for compulsory personal finance education in schools to help young people learn how to manage their money earlier.

Half of British consumers (48%) said they could not cope with any further unexpected costs, with 35% already struggling on their current incomes. However, people earning the second lowest wage bracket (£12,376 – £21,424 per year) have seen the biggest decline in quality of life; from 69% reporting that they are ‘living comfortably’ in 2003 to 48% in 2010.

Consumers who sit in the lowest income bracket earning £12,376 a year of less, were found to have the highest debt ratio, owing 37p for every £1 they earned. Together with the group in the wage bracket above, the two groups form a larger group of working poor – the squeezed bottom.

Mr Lloyd said: ‘Shocking numbers of people say they are forced to take on new forms of debt just to make ends meet, and many more would not cope with unexpected shocks to their incomes or household bills.’

Consumers are struggling to save money in this economic downturn, as most find it difficult to save 7p from every £1 – predicted to drop to just 5p by 2016. In fact, compared to other European countries, only Latvia and Lithuania save less of their income than the UK.

As a result of financial difficulties, consumers are looking harder at their budgets and where they can save. 43% of people said they would try to cut back on food costs, while more than 50% will cut back on holidays and socialising. More worrying for the economy, only 7% of people are willing to spend any money they have left over.

Which? wants to see confident consumers and strong businesses driving economic recovery.  However, Mr Lloyd warned: ‘The consumer has too often been an afterthought in the government’s growth agenda. With this new report, we show just how well those with power, both in government and business, are doing at putting consumer wellbeing first.’