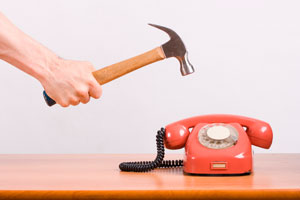 Complaints to the Telephone Preference Service (TPS) about unwanted marketing calls have jumped to almost 10,000 a month according to new figures released by industry regulator Ofcom.

In July consumers made 9,803 complaints to the TPS about unsolicited marketing calls, compared to 3,212 in December 2011. Ofcom, which maintains a register of people that opt not to receive this type of call, said increased activity by payment protection insurance (PPI) and accident claims companies was partly to blame for the steep rise.

The Information Commissioner’s Office is responsible for taking enforcement action where a company makes marketing calls to a person who is registered with the TPS and has not given prior consent to receive such calls. Consumers can complain directly via the ICO’s website.

Complaints about abandoned or silent calls have also trebled in 2012, rising from 957 in December 2011 to 3,390 in July. Silent calls typically occur when predictive diallers, which are used by call centres to phone large numbers of people, connect the call before a call centre agent is available to deal with it.

Ofcom can take enforcement action against companies making silent calls including fining companies up to £2m.

Consumers can register with the TPS to indicate that they don’t want to receive sales and marketing telephone calls.

However in an online poll for Which? Conversation, 76% of respondents told us that despite signing up to the scheme they still receive lots of nuisance calls. That’s why in July, Which? and nine other organisations, ranging from Citizens Advice to Privacy International, wrote to the Direct Marketing Association (which administers the TPS), Ofcom and the Information Commissioner to ask them to do something about this huge problem.