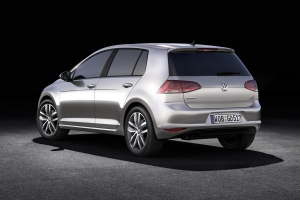 Money-savvy car buyers may decide to wait for more details of two new cars being launched at the Paris Motor Show. The new Volkswagen Golf and Seat Leon are both strikingly similar to the new Audi A3 Sportback under the skin, but both are likely to undercut the Audi on price.

In spite of these price differences, all three vehicles are built on the VW Group’s new ‘MQB’ platform, so there’s very little to choose between them other than their badges and styling.

See our Paris Motor Show previews of the A3, Leon and Golf 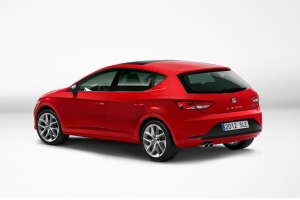 All three cars share the same wheelbase of 2637mm (up around 60mm on the previous generations, with a corresponding boost to interior space).

All are slightly wider than their predecessors, but only the Leon shrinks in length, by some 55mm to 4260mm – perhaps not coincidentally, almost exactly the same figure as the new VW Golf. The A3 is slightly longer, however, at 4310mm.

The new cars have all been on a near-identical weight-saving diet, too, with Seat and Audi shedding the same 90kg overall, and the Golf losing 100kg.

All three brands also claim exactly the same boot space for their new cars: 380 litres, which is slightly bigger than before in all three cases.

In terms of body styles, the A3 is already available in three-door form, while the Golf is also being built in three- and five-door shapes. The Leon arrives in five-door form initially, but will also be joined by a sportier-looking three-door and – uniquely in this trio – an ST estate version. 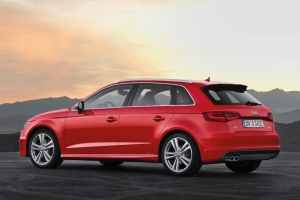 The economy stars of each range are the same too: the 1.6 TDI 105bhp model will return a claimed 74.3mpg in each case. And all three will emit 99g/km of carbon dioxide.

That’s mostly because the VW Group shares identical engines and transmissions across brands and models. For example, all three will share the same 1.6 TDI 105 and 2.0 TDI 150 diesels, plus the 1.2 TSI 105 petrol.