Which? is calling on the banks to ensure they set aside more funding to pay back customers who were mis-sold payment protection insurance (PPI), as complaints continue to rocket and the £10bn set aside by the banks could run out within months.

The number of new PPI claims more than doubled to 2.2m in the first half of 2012, a 129% increase on the previous six months, according to new complaints data from the Financial Services Authority (FSA) published today.

PPI funds to start running out

New Which? analysis suggests that if PPI payouts continue at the same pace as the first half of this year, Lloyds could run out of provisions for this purpose by November 2012, Barclays by December 2012, RBS within the next six months and HSBC by August next year.

As the full extent of the PPI scandal continues to unfold, Which? is calling on the banks to ensure they set aside sufficient funds to make sure customers who were mis-sold PPI are properly compensated and ensure they are making it as easy as possible for customers to claim back the money they are owed. 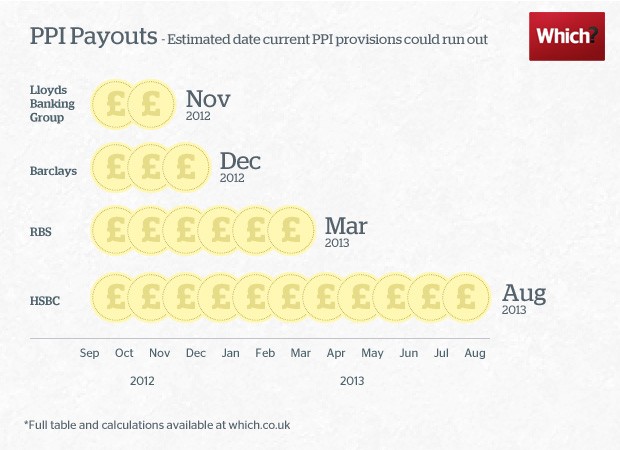 Lloyds TSB, Bank of Scotland and Barclays received the most complaints in the data published by the FSA.

The number of banking complaints increased by 5% to just over 828,000 in the first six months of the year. Read our guide on for more information.

Which? also wants to see the banks publish monthly updates so there is full transparency about the amounts that have been paid back. Banks should also claw back bonuses from senior executives who presided over the mis-selling scandal to help fund the new provisions.

Which? chief executive officer Peter Vicary-Smith said: ‘With well over two million PPI complaints being made in just six months, PPI is now the biggest financial scandal of all time. The banks must set aside more money for PPI claims and make it easier for customers to get back what they are rightly owed, without any hassle.’

‘Consumers are continually being short-changed by the banks. We’re campaigning for Big Change in the culture of banking to put customers first, not bankers, and protect the public suffering from further mis-selling and scandals.”

Which? has launched a major new campaign ‘Big Change’ to put consumers’ best interests at the heart of banking reforms. The public can support the campaign by signing the ‘Big Change’ pledge.

Big Change is calling for: