Travel agents and tour operators selling holidays involving a flight with hotels or car hire must give travellers a certificate explaining how their holidays are protected from today.

The Atol Certificate must be given out to everyone who buys a holiday that is covered by the , which protects your money if a company involved in the holiday goes bust before you depart and guarantees you will be brought home if the company collapses while you are abroad.

New laws increasing the number of holidays protected by Atol have been in force since April, but from this month it is now a legal obligation for retailers to give you a certificate. Failure to do so is a criminal offence, which could ultimately be punished by two years in jail. 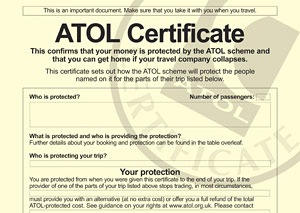 You should be given a certificate, like the one shown here,  stating what parts of your holiday have financial protection, what company is giving you that protection, and what you are entitled to if that company goes bust.

You should be given a certificate in three circumstances. The most simple is if you buy a traditional package holiday, covered by the European Package Travel Directive.

Another is what is known as a Flight Plus holiday, which is not covered by the Package Travel Directive, but does have the financial protection of the UK’s Atol scheme. The third is if you buy only a flight from a retailer that is not the airline.

Ask for your Atol Certificate

Sales of holidays by airlines themselves are not covered by the Atol scheme, so you should not expect an Atol Certificate from airlines.

Which? thinks reforms to the Atol system could go further by bringing airlines into the scheme.

Always ask for an Atol Certificate if you buy a package, Flight Plus holiday or a flight from a retailer other than the airline. If you are not offered one consider whether you should book the holiday, and report the retailer to the Civil Aviation Authority.

A Which? spokesperson said: ‘Travel agents and tour operators are, by law, required to issue Atol certificates which are vital for holidaymakers to know the level of protection they have for their holiday. We would advise consumers not to book through a travel agent or tour operator who is unable to issue an Atol certificate for an Atol-protected holiday.’