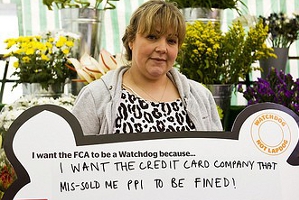 Consumers have told Which? what they’d like from the new financial regulator

Which? welcomes the Financial Conduct Authority’s plans to put consumers at the heart of banking reform and intervene before mis-selling practices reach the financial market.

On the 16 October 2012, the Financial Services Authority published its plans to transfer its powers to the new Financial Conduct Authority.

From 2013 the FSA will split into two new authorities: The Financial Conduct Authority (FCA), which will have responsibility for protecting consumers and The Prudential Regulation Authority (PRA), which will focus on maintaining financial stability.

The paper, The Journey to the FCA, set out how the UK’s new financial conduct regulator will operate.

Which? chief executive Peter Vicary-Smith said: ‘We hope the Financial Conduct Authority is a strong, open and proactive regulator that stands up to the banks. We’ll be watching closely to make sure the FCA keeps to its word and puts consumers at the heart of everything it does.’

One of the regulators key new powers will be its ability to step in and ban the sale of products that pose unacceptable risks to consumers for up to 12 months, without consulting first. It will also be able to ban misleading advertising on financial products. Of the proposed changes, Martin Wheatley said:

‘Reforming regulation is not just good for consumers, it will also be good for firms.  The industry’s standing has suffered as the mis-selling scandals and other problems have taken their toll. This has damaged the reputation of firms across the industry, whether directly involved or not. We need to work with you to put that right.’

Big Change in the banks

Which? has lobbied for a strong, open and proactive regulator over the course of the year. Consumers got involved in our campaign by nominating suitable watchdogs and voting for a winner. Hungarian Vizsla Milo became the face of our Watchdog not Lapdog campaign in March 2012. As the journey to the FCA unfolds, Which? will continue to scrutinise the performance of the regulator to ensure that it delivers on its promises.

As well as campaigning for a better approach to regulation we are also focusing our campaigning attention to call for Big Change in banking culture as we think banks should work for customers, not bankers. We’re not alone, as more than 90,000 people have already pledged their support through Which? and 38 Degrees.