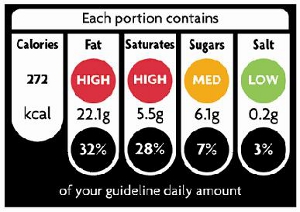 Consumers will be able to make healthier food choices as the government has announced that it wants the food industry to adopt a consistent system of front-of-pack traffic light labelling, an issue Which? has campaigned on for a number of years.

Until recently, only a few supermarkets were using the system. Then a few weeks ago, several more supermarkets came on board. Today, Iceland became the final major supermarket to confirm its commitment. Which? executive director Richard Lloyd welcomed Iceland’s news as ‘better late than never’.

Mr Lloyd said: ‘With levels of obesity and diet-related disease on the increase it’s vitally important that people know what’s in their food so that they can make an informed choice.’ He warned: ‘The government now needs to press food manufacturers to make sure labels are consistent and based on strong, independent criteria, so that consumers can easily compare products.’

The government wants the whole food industry to adopt a full hybrid system. This means that they will have to use the words ‘high’, ‘medium’ and ‘low’ along with the traffic light colours and Guideline Daily Amount (GDA) percentages.

The addition of text will provide further clarification for people who are colour blind or where printing can cause confusion between the red and amber colours.

Health minister Anna Soubry said: ‘The UK already has the largest number of products with front of pack labels in Europe but research has shown that consumers get confused by the wide variety of labels used.’

She added: ‘By having a consistent system we will all be able to see at a glance what is in our food. This will help us all choose healthier options and control our calorie intake.’.