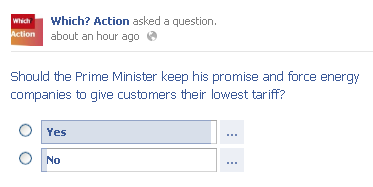 Do you want the Prime Minister to keep his promise? Cast your vote at www.facebook.com/whichaction

Which? is calling on the Prime Minister to keep his promise to legislate so that energy companies are forced to give customers their lowest tariff.

During Prime Minister’s questions on Wednesday 17 October, David Cameron said: ‘I can announce that we will be legislating so that energy companies have to give the lowest tariff to their customers.’

Earlier today the energy minister John Hayes responded to an urgent question in the House of Commons on the issue. Mr Hayes said the details over the energy market reform had yet to be worked out and further clarification would be provided in the Energy Bill due to be published in November.

Campaigning organisation 38 Degrees has also called on its members to ask the government to keep its promise to reform the energy market.

Which? executive director Richard Lloyd said: ‘The Prime Minister must stick to the promise he made in Parliament to legislate so energy companies have to give the lowest tariff to their customers.’

He added: ‘Just giving people information on the lowest tariff is not enough when trust is at an all time low in the industry and switching levels are falling.’

Which? has been pressing the government for years to make sure people get a better deal so we must now see these words turned into action.