The terms and conditions published by banks for standard current accounts are frustratingly complex and difficult for consumers to understand, a new investigation carried out by Which? has found.

Which? put the terms and conditions of standard current accounts from eight major banks and building societies to the test, asking people a series of questions to see if they understood the T&Cs correctly.

Despite the testers being given unlimited time to answer the questions, for none of the banks were they all answered correctly. The percentage of correct answers across all banks ranged from Lloyds TSB’s score of 53% to NatWest, which scored highest, with 67%.

It also took a significant amount of time for our testers to discover the right answers in some cases, with one person taking 17 minutes to correctly answer a question on First Direct and another taking 15 minutes on Halifax. The results can be seen in the graphic below. 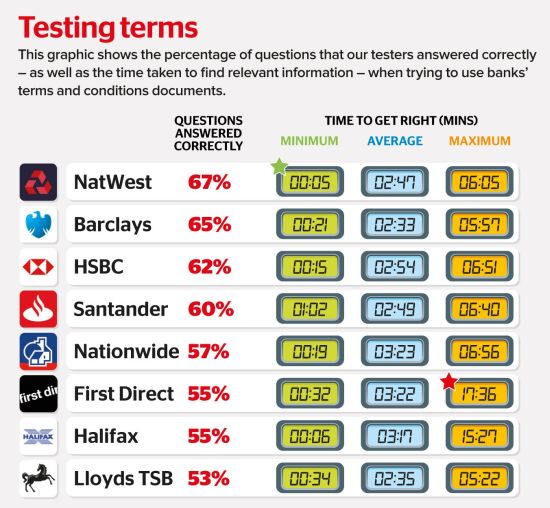 Only one in ten Which? members surveyed told us they had read their bank’s T&Cs thoroughly when they opened their account, which is unsurprising when our research suggests it would typically take between 25 minutes and over an hour and a half to read a set of terms and conditions from the ten major banks.

HSBC topped the table for the longest terms and conditions running to nearly 30,000 words which would take an average person over an hour and a half to read. First Direct and Halifax would also take more than an hour to read with both of their T&Cs at over 20,000 words.

Time for a Big Change in banking

Peter Vicary-Smith, Which? chief executive, said: ‘It’s completely unrealistic for banks to expect their customers to plough through 30,000 words of financial jargon and small print. Banks should drastically reduce the length of their terms and conditions, so that their customers are not put off from reading them in the first place, and make sure they are clear, jargon-free and easy to understand.’

The Which? Big Change campaign is calling for banks to work for customers, not bankers and to put customers at the heart of what they do. With trust in bankers at rock bottom, Which? is calling on the banks to make their products more transparent.

Big Change is calling for: