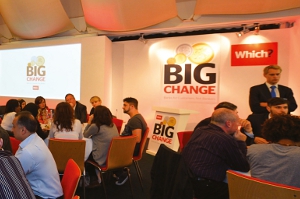 Which? has sought feedback from consumers and bank sales staff in order to provide the Banking Commission with comprehensive evidence

A new Which? investigation of more than 500 front line bank staff reveals that pressure to sell still pervades the culture in the big five banks.

Which? interviewed branch and call centre staff from the five major banks – HSBC, Royal Bank of Scotland, Lloyds Banking Group, Barclays and Santander. Our research revealed that two-thirds of bank staff who have a sales role and sales targets say there is now more pressure than ever to meet those targets.

The dominant sales culture in Britain’s banks is encouraging mis-selling, almost half (46%) said they knew colleagues who had mis-sold products in order to meet targets. Four in 10 felt they were sometimes expected to sell even when it was not appropriate for the customer.

Which? chief executive Peter Vicary-Smith said: ‘This proves the need for big change across the industry and for bankers to put customers first, not sales. We’re calling on the banks to be much more transparent about their sales targets and incentives.’

Two-thirds of bank staff who have a sales role and sales targets say there is now more pressure than ever to meet those targets.

Some high-street banks are making moves to reduce sales targets, with 41% of bank staff saying they had noticed a decrease in the availability of incentives.

However, 81% say that the pressure to meet sales targets had stayed the same or increased, with two thirds of staff in sales roles saying they are sometimes or always told to sell more.

Peter Vicary-Smith said: ‘Our survey reveals the stark realities of the sales culture that still exists at the heart of the banking industry. Senior bankers say the culture is changing but this shows it just isn’t filtering through to staff on the front line who remain under real pressure to put sales before service, even after incentives are taken away.’

Which? is calling on all the banks to refocus their incentive schemes on customer service, as Barclays and The Cooperative bank have done.

Further research from Which? found that customers are feeling the effects of the pervasive sales culture in Britain’s high-street banks. Four in 10 say the last time they contacted their bank they were offered a new product or service that wasn’t suitable and a quarter (25%) felt pressurised to take it.

Which? calls for Big Change

With only one in 10 people trusting bankers to act in their best interests, Which? wants to see Big Change in the banking industry to help restore consumers’ trust.

Which? is handing in a dossier of evidence to the Parliamentary Commission on Banking Standards. The dossier includes the bank staff survey, consumer views and previous research on the banking industry. This is in addition to 120,000 signatures from the general public pledging their support for ‘Big Change’ in banking with Which? and 38 Degrees.

Do you agree that banking culture needs to change? Spread the word about this story via Facebook and Twitter.