As some smoothies contain more sugar than Coca-Cola, as they as healthy as you think?

When we asked how many of your five-a-day you can get from smoothies, three in 10 people told us they think they can get more than two portions, and one in 10 believe they can get all five. 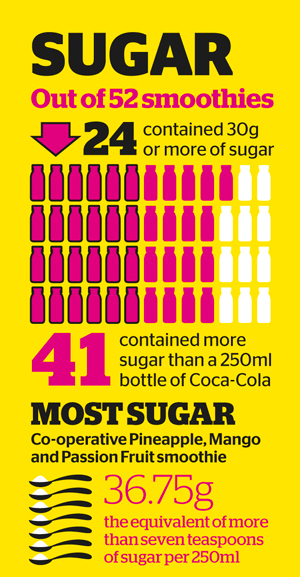 All of the figures are based on a standard 250ml portion

However, no matter how many smoothies you drink, they can only count as a maximum of two of your five-a-day (and drinking a glass of juice won’t take you up to three). This is because smoothies contain less fibre than whole fruits or vegetables, as some is lost during juicing.

When we compared the nutritional value of 52 smoothies from leading brands and supermarkets, we found 22 contained only one portion of your five-a-day.

Although the sugar in smoothies is natural and not added, the sugar released when the fruit is juiced or blended is as damaging to your teeth as the sugar found in fizzy drinks.

A dentist with 22 years experience, Paul Diss, told Which?: As far as tooth decay is concerned, sugar is sugar. And when combined with an acidic drink, such as one with citrus fruits, it can be particularly damaging to teeth.’

All of the smoothies we examined contained more calories than the equivalent amount of Coca-Cola. This is because you consume all of the fruits’ sugar and calories, which you would be unlikely to eat in one go.

For example, drinking one 250ml Innocent Blackberries, Strawberries and Blackcurrants smoothie contains: 3.5 blackberries, one strawberry, 31 blackcurrants, 5 white grapes, 1 apple, half an orange and half a banana. If you’re watching your calories, you would be better off drinking some water and eating an apple.

Asda’s Pineapple, Banana & Coconut smoothie contained the most calories with 177.5 kcal per 250ml.

A 250ml bottle of RDA Organic smoothie costs £1.99. An apple costs around 30p. Both provide you with one of your five a day.

If you’re looking for a healthy drink, smoothies contain nutritional value from pulped fruit, but they do vary in terms of calories, sugar and portions of your five-a-day they contain.

Which? executive director Richard Lloyd says: ‘It’s clear from our research that smoothies may not be as healthy as people think. Smoothies are a good source of fruit and provide valuable vitamins and minerals, but they can contain high levels of sugar and calories so should be consumed as part of a balanced diet.’