Shoppers don’t know their rights on using gift vouchers when a retailer goes bust, a new Which? survey has revealed. 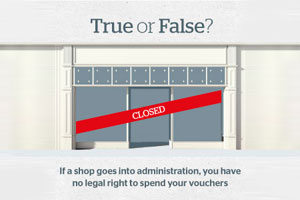 One in three people Which? surveyed wrongly believed they’d have a legal right to a refund of the value of their gift voucher if a retailer went bust.

Customers with gift vouchers have been left out of pocket with the recent collapse of high street stores such as HMV, Blockbuster, Jessops and Comet.

When a company goes into administration the administrators put in charge of the company’s finances can legally refuse to accept vouchers if they consider this to be in the best interest of the company.

Which? wants the rules on vouchers and insolvency to be reviewed to ensure consumers are properly protected.

Read the Which? guide on using your vouchers if a company goes into administration.

Should you still buy vouchers?

Eight in 10 people we surveyed have used a gift voucher in the past two years, with half saying that someone had bought it for them.

But 52% of people told us they would now be less likely to buy gift vouchers at all now, due to recent problems faced by some high street shops.

If a company goes into administration, it depends purely on the administrators as to whether you get the value of your vouchers back.

Even if the administrators initially refuse to take vouchers, they may decide to honour them at a later date.

Refused vouchers – what to do next

But there’s is no guarantee you’ll get all or any of your money back, and it could take up to 12 months to process the claim.

If a voucher is worth more than £100 and was bought with a credit card, they may be able to claim a refund from their credit card company under Section 75 of the Consumer Credit Act.

You don’t need to have paid the full amount of the voucher on your credit card for Section 75 to come into effect, although the total value of the voucher would have to be over £100.