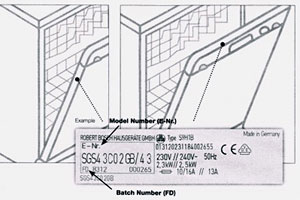 The manufacturer that makes Bosch, Neff and Siemens dishwashers (BSH) is making a renewed attempt to track down potentially dangerous models originally recalled in 2011.

After recovering only around 24% of affected models, Recall UK estimates that there are almost 480,000 potentially dangerous dishwashers still in people’s homes.

The products were first recalled in July 2011 when it was discovered that some dishwashers could overheat and, in rare cases, become a fire hazard.

Do you own a faulty dishwasher?

The affected dishwashers were manufactured between 1999-2005 and include models in the batch numbered FD7901 to FD8504.

Bosch says that it will repair affected dishwashers free of charge, in your home.

If you’re looking for a new dishwasher, read our dishwasher reviews to find the best model for you.

According to government figures, almost 6,000 appliances or their electrical leads caught fire because of faults in 2010/11.