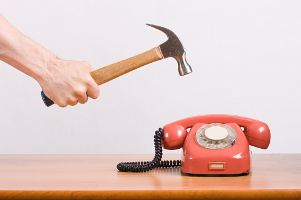 Which? is calling time on nuisance calls and texts

On the day that Which? launched its campaign to call time on nuisance calls, the Information Commissioner’s Office (ICO) fined Scottish company DM Design £90,000.

The ICO and Telephone Preference services received 2,000 complaints regarding Glasgow based DM Design. The company consistently failed to check whether individuals had opted out of receiving marketing calls and responded to just a handful of its complaints.

Our new campaign calls on the relevant regulators to set up a joint taskforce to properly police and punish those responsible for nuisance calls and texts.

Which? executive director Richard Lloyd said: ‘We’re pleased to see the Information Commissioner taking more action, but this small fine is far from the sort of deterrent needed to call time on the use of nuisance calls and texts.’

He added: ‘With seven in 10 people receiving an unsolicited call in the last three months it’s clear that the current approach to enforcement isn’t working and much tougher action is needed.’

If you’ve experienced an unwanted calls or text share your views with Richard Lloyd on Which? Conversation.

Which? has called on the ICO, the Ministry of Justice, Ofcom and the Office of Fair Trading to set up a taskforce to clamp down on unwanted calls and texts.

The taskforce should start by looking at the Personal Injury and Payment Protection Insurance (PPI) claims industries which people tell Which? they are most likely to receive calls from.

Which? wants the joint taskforce to:

The ICO has informed two more companies that it is intending to impose significant penalties over breaches of the law, with a final decision likely in the coming weeks. A further 10 companies are subject to ongoing investigation for cold-calling and sending spam text messages.

The ICO and Ofcom today also warned companies making marketing calls to stick to the regulation or face enforcement action.

In a joint open letter, the regulators make it clear that they will continue to monitor consumer complaints to identify companies for future investigation. The letter stresses the importance of complying with the legal and regulatory measures in place to protect consumers from nuisance calls and texts. We hope the ICO and Ofcom will turn these strong words into tough action.