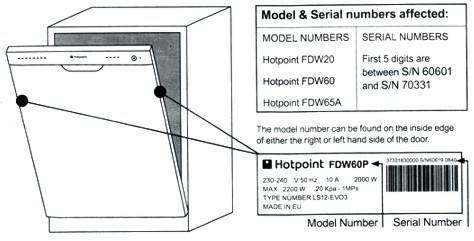 Hotpoint is attempting to track down dishwashers revealed to be potentially dangerous in a Which? report.

The dishwasher manufacturer has issued a product recall notice for dishwashers from its FDW2&6 series, stating that it is aware of an electrical component failing in a small number of cases. This could lead to overheating and be a potential fire hazard.

Which? reported a year ago, in April 2012, that there appeared to be a disproportionate number of fires attributed to Hotpoint – even taking into account the brand’s popularity and large market share.

Hotpoint stated at that time that dishwashers in its FDW2&6 series were ‘under investigation’. Asked why it had taken the company a whole year to issue a product recall, a Hotpoint spokesperson said:

‘At Hotpoint the safety of our appliances is our main priority and we have been engaged in an ongoing repair programme covering three Hotpoint FDW dishwashers.

‘In agreement with the relevant industry bodies, given the low risk to safety and in order to achieve the most effective response rate from consumers, we agreed a two-phased approach.

‘Phase one – proactively contacting our consumers directly since October 2012 using our warranty information along with retailer databases to make consumers aware of this particular repair. The current press campaign this week is phase two of this programme.’

Do you own a faulty dishwasher?

The affected dishwashers were manufactured between June 2006 and March 2007 and include models numbered FDW201, FDW601 and FDW65A.

To check if you own one of these potentially faulty dishwashers, check the model and serial number by looking at the sticker on the inside of the dishwasher door. The serial numbers of the models are nine digits long, with the first five digits containing numbers between 60601 and 70331.

If you discover that you own one of the models affected, call Hotpoint’s customer service line on 08448 910094 or email fdw@hotpoint.co.uk. Hotpoint says that it will repair affected dishwashers free of charge in your home.

Faulty appliances cause thousands of fires

According to government figures, almost 6,000 appliances or their electrical leads caught fire because of faults in 2010/11. This number could be even higher, as it’s estimated that 70% to 80% of smaller fires are dealt with by homeowners themselves, rather than the fire brigade.

‘Nearly a year ago we called for the government to collect and analyse information on house fires caused by faulty appliances, by brand.

‘Greater transparency would alert manufacturers and give consumers greater protection against faulty appliances so they can prevent damage to their homes.’